SOME VERY INTERESTING PHOTOS YOU HAVE TO SEE:

Once in a while, photographers capture some real unique photos.  Here is a small collection worth checking out:

When Dutch astronaut André Kuipers isn’t out in orbit exploring space or logging hours on the International Space Station researching muscle atrophy in astronauts, he can be found taking awesome photos of water droplets like this one: 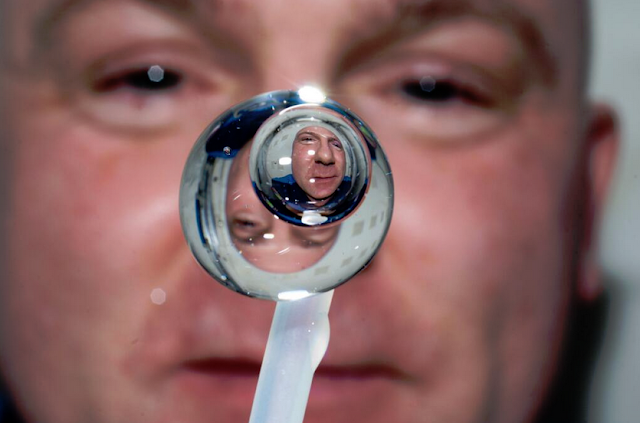 Though it appears as though this is two drops of water, it is actually only one drop. An air bubble was placed inside the water using a straw, then Kuipers posed behind the drop just right for the photograph. Pretty cool!

Not many people get to experience what it looks like when a firearm is shot underneath water, and one enthusiast decided he had been deprived for too long. So Andrew Tuohy did what anyone with a Glock 22, a swimming pool, an underwater camera, and some courage would do–make a video of himself shooting the handgun underwater right in his own backyard.

Pretty much everyone is familiar with Hollywood’s Christopher Nolan and the creativity he brought to cinematography when he gave us Inception. He has also been a trendsetter and source of inspiration for many years, which brings us to this Inception-style drone photo taken by ezzif. This style of processed photography is also referred to as mind-bending shooting. The photographer captured five photos at different angles with his drone and stitched them all together by layering them into Photoshop:
The result gives a great sense of mystery and fascination, as the green pastures complement the vast majority of the picture and make it look surreal. The tone is quite smooth and well-rendered and doesn’t look overdone. Ezzif draws a fine line between reality and fantasy with this beauty.

On his way to snowy St. Anne’s mountain for a winter shooting adventure, romanian photographer Dan Dinu had a lovely surprise, as he was presented with the chance to properly meet and photograph a posing wild fox. Indeed, it doesn’t sound quite true, but the following picture leaves no doubts about this uncommon and potentially dangerous meeting:
The fox happened to be raised by a local forester, and so it became rather friendly around small (and quiet, if possible) groups of people/tourists. Dan says it’s still prudent to keep your distance from this kind of wild animals — you shouldn’t even try to feed them, as they may act strangely and realize you’re some kind of a menace to the species. As a matter of fact, Dan states that it was the fox itself who took the liberty to get closer to him, and not the other way around!

But it so does seem that several friendly foxes do walk around the route to St. Anne’s mountain greeting and posing to photographers. Dan himself saw four of them within a short distance, but only this particular one was affable enough to peek around the wide angle lens:

Grabbing a drink of water for this grey-headed flying fox can be more challenging than you might think. Photographer Ofer Levy waited patiently in over 40° C (104° F) weather while also standing chest deep in the water hoping one of these creatures would swoop low enough to be photographed. The animal drinks by swooping down into the water and getting itself wet, then licking the water off of itself:
Levy made his passion into his career and mainly does wedding photography but also loves being outdoors. He says,


“Later on in life I became especially interested in wildlife photography. This passion persists and I spend a lot of time and effort in the field, honing my skills, and enjoying the ongoing challenges that this area of photography demands.”

Levy is the recipient of multiple photography awards and is living his dream. You would have to really love the grey-headed flying fox to stand in that hot weather for three hours a day waiting for the right moment!


The following image is —incredibly—not computerized in any way. That is to say, the bear, at least, is as real as the girl. The whole thing is a remarkably deft photo shoot showing the delicate and beautiful potential harmony between humanity and nature:
This fairytale image is one of a whole portfolio created by Russian photographer Katerina Plotnikova, who shoots with a Canon 5D Mark II. On her site, you can find many more soft-focus portraits of redheads hugging animals of all kinds: deer, chipmunks, owls, moose, raccoons and even, somehow, an elephant. Between shots, the bear’s trainer fed the bear to make sure it, you know, didn’t maul and devour everyone onset.

Some of the best moments in photography happen during the sunrise or sunset. This is when the sky and clouds display warm colors, as shown in the picture below. The image foreground can have a detailed, interesting landmark such as this church on a hill near the mountains. The fog hides the rest from detail, leaving only enough space to show the dense forest surrounding the church. Locations such as this one attract people and photographers from all over:

Janez Tolar captured this amazing image of The Church of St. Primoz in Jamnik, Kranj, Slovenia. This magnificent backdrop creates a stark contrast beetween the historic building and nature itself. He was able to blend the warm colors of the sky and cooler tones of the mountains and fog to highlight the glowing church. His body of work includes shots of this church during different times of the day and year. During the evening, the church is lit as shown. It really adds to the atmosphere of the fog and shadows covering the area.

Well, some might say it’s pure luck, others will say it’s the result of hard and intensive work – and I prefer the second option. But we can’t deny to the fact that photographer Peter Cairns (whether out of luck or out of patience and persistence) achieved a glorious and majestic picture of a sub-adult female golden eagle in flight, at Cairngorms National Park, Scotland. The picture is part of a wild nature series, called Tooth and Claw: living alongside Britain’s predators.

With his wife, Peter Cairns founded Northshots back in 1999, and has been racking up numerous competitions awards, producing several books and authoring projects such has Tooth & Claw, Wild Wonders of Europe and 2020VISION. Peter is also an associate of the International League of Conservation Photographers and the director of The Wild Media Foundation and Wild Scotland, the country’s representative body on nature tourism.

Composite photography opens up new doors for the creative photographer. You can make the impossible seem possible. You can turn vivid and wild dreams into a reality. The possibilities are endless. Just take a look at this image for proof:
The photographer has a busy bird feeding station in his backyard, and when he wanted to create a photograph of all the different kinds of birds that visited the feeder, he called on composite photography. After taking many photographs of all the birds, he stacked the frames on top of one another in Photoshop to create this awesome photo.

Photography is a great way to showcase images of endangered species, landscapes, and plants. It is often used to help in conservation efforts to help educate, engage, and inspire others to learn more about vulnerable wildlife and ways to help protect them. Co-founder of Pacific Wild and professional photographer Ian McAllister captured this amazing image while working with National Geographic:
McAllister used an underwater housing to capture the image of this elusive creature while on the coast of British Columbia. The wolf was eating a herring roe, when it stopped to examine McAllister’s half-submerged camera. Amazing wildlife photography requires a delicate balance of patience, a good eye, a way to enhance your subject, knowledge about what you’re photographing, and a passion for nature.

IT'S ALWAYS INTERESTING WHEN YOU GET PROFESSIONAL PHOTOGRAPHERS WHO CAPTURE THESE PHOTOS - ON PURPOSE, OR BY ACCIDENTLY ON PURPOSE.  BUT WHATEVER THE CASE... THEY ARE SOME PHOTOS THAT ARE WORTHY OF TALKING ABOUT AND SHARING WITH THE WORLD..... PLEASE.

Thanks to Picture/Correct for the use of these magnificent photos.