WEEKEND EDITION: PHOTOS FOR THE PERFECTIONISTS:

For the perfectionists: incredibly satisfying images

Do you get a feeling of satisfaction when you see an image of something that has been perfectly organized? Whether its by shape, color, or size, things in their right place can give you a feeling of inner calm. Take a look at the following examples!


All photos courtesy of:    Imgur/reddit

This collection of Photos was originally posted by:

Shop for professional photos, photo accessories, and all sorts of other things there, just because we appreciate your support.

PHOTOS OF THE WEEK: FROM "MANY WONDERS" 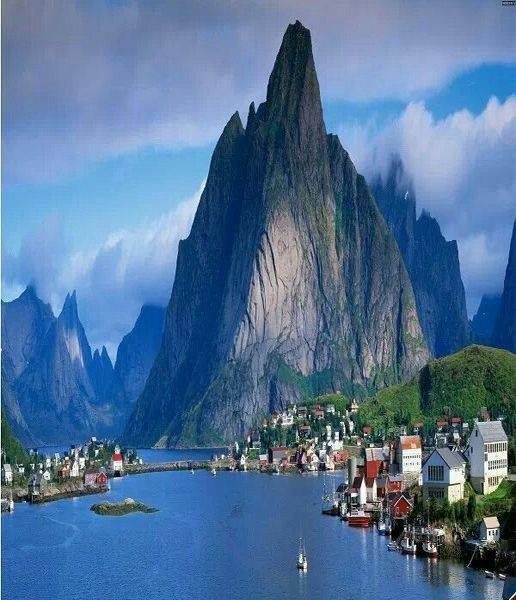 WE DEFINITELY LIVE ON A WONDERFUL PLANET FILLED WITH MANY
WONDERS.
THESE PHOTOS WERE TAKEN FROM THE WEBSITE:
MANY WONDERS
AND THERE ARE MANY MORE PHOTOS LIKE THESE WAITING FOR YOU TO
ENJOY.
GO TO:
https://www.facebook.com/ManyWondersTRS/?ref=page_internal

Email ThisBlogThis!Share to TwitterShare to FacebookShare to Pinterest
Labels: Photos of the Week

ALL ABOUT "AUTO EXPOSURE BRACKETING"

NOW THIS IS A SUBJECT THAT I HAVE LOVED WAY BACK WHEN I TAUGHT PHOTO CLASSES WHEN FILM WAS THE POPULAR THING.  AND IT WAS SOMEWHAT IMPORTANT FOR THOSE WHO SHOT SLIDE FILM, RATHER THAN PRINT OR NEGATIVE FILM.   THE REASON IS THAT SLIDE FILM HAD NO FORGIVENESS IN HOW YOU SHOT IT.  WITH PRINT FILM, A LOT OF YOUR GOOFS COULD BE CORRECTED IN PRINTING.  BUT NOT SLIDE FILM.  YOU HAD TO DO YOUR EXPOSURE CORRECT THE FIRST TIME, OR IT WOULDN'T COME OUT GOOD AT ALL.

IT'S THE SAME THING WITH DIGITAL CAMERAS, TO AN EXTENT.  TOO MANY PHOTOGRAPHERS, WILL JUST GO BACK TO THEIR COMPUTERS, AND FOR OVER OR UNDEREXPOSED PHOTOS, THEY WILL JUST FIX IT ON THE COMPUTER.  I RECENTLY HAD A WEDDING PHOTO COME TO ME THAT WAS WAY OVEREXPOSED.  THEN I TRIED TO DARKEN THE PHOTO IN THE COMPUTER, AND THERE IS JUST NOT THE IMAGE THERE TO FIX IT RIGHT.  I WORKED ON IT FOR WEEKS, AND I GOT IT TO THE POINT THAT AT LEAST THEY HAD GOOD SKIN TONES, BUT, THE REST OF THE PHOTO WAS STILL NOT WHAT I CALL PLEASING, BUT, THEY WERE HAPPY.  SO, THAT BRINGS UP THE IDEA OF EXPOSURE BRACKETING.  THIS IS SOMETHING YOU DO WHEN YOU TAKE THE PICTURE.  AND IT IS EASY TO DO WITH MOST CAMERAS.

SO WHAT IS BRACKETING?  Bracketing is the technical term for a sequence of frames of the same image, shot in rapid succession and all at different exposures. Normally, it is a sequence of multiple frames with each exposure differing from the other frames in steps of between 1/3 of a stop up to a full stop or even two stops. Each sequence starts with a central exposure the camera deems to be the ideal exposure for the overall scene. Then another image is shot under-exposed and one image shot over-exposed. Hence the ‘correct’ exposure is bracketed (or sandwiched) between two exposures which are under- or over- exposed by the same amount. 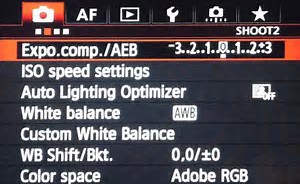 MOST CAMERAS THAT ARE SOMEWHAT NEW TODAY, HAVE THIS MODE BUILT-IN SOMEWHERE.  ABOVE YOU SEE THE CANON VERSION OF HOW TO GET TO THAT MODE.  HERE YOU CAN SET FOR BRACKETING, AND HOW FAR YOU WANT TO SET THE OVER AND UNDER EXPOSURE.

WHAT IS THE REASON FOR DOING ALL THIS ?
There are times when it’s difficult to decide on what the ideal exposure should be to get the best image of a scene. It may be that you don’t have the time to think about your exposure, or it may be that there are elements of extreme brightness and shadow within the picture that you want to capture, and you’re not sure whether exposing for the highlights or the shadows will give you the better final image. Bracketing for high dynamic range (HDR) could be the solution. 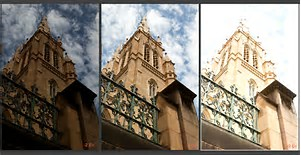 WHY IT'S EASY WITH A DIGITAL CAMERA:

Once you have properly set your camera on auto exposure, set the camera up for auto exposure bracketing, and you set it up for taking the 3 photos, then you look at the results, you take the best of the  3 photos, and discard the 2 bad ones.  Back in the old days of film you did the same thing, but, you threw away valuable film.  You don't do that with digital.  You just saved more room on your card.  Digital is so nice.

COMBINE THE 3 IMAGES FOR THE PERFECT PICTURE:

So, the other advantage of bracketing your photos is that you are picking up the best of the highlights of your photo, and then also with one of your exposures you are picking up the best of your shadows.  Now, if you have a good editing tool on your computer, you would combine the 3 photos together and get the most remarkable photo ever, because you have combined the best of the highlights, and the best of the shadows and you now have a perfect photo:
SO TRY EXPOSURE BRACKETING NEXT TIME YOU HAVE REALLY DIFFICULT LIGHTING TO FIGURE OUT.  AND SEE WHAT YOU WOULD LIKE.

DON'T FORGET TO VISIT OUR STORE'S WEBSITE AND CHECK OUT THESE
SPECIALS:

USE THE "SKY" TO BE A DIFFERENT LANDSCAPE PHOTOGRAPHER

THE SKY CAN BE YOUR FRIEND IN LANDSCAPE PHOTOS

ANOTHER ONE OF THE AMAZING THINGS THAT COULD HELP YOU TO BE "DIFFERENT" THAN ALL THE OTHER PHOTOGRAPHERS THAT TAKE LANDSCAPE PHOTOS, IS TO BE A "SKY" PHOTOGRAPHER.  SO MANY TIMES WE FOCUS ON THE LANDSCAPE OF THE LAND IN FRONT OF US, WHEN WE COULD SERIOUSLY LOOK AT THE SKY AND BE MESMORIZED BY THE BEAUTY ABOVE US.  HOW MANY TIMES HAVE WE SEEN PHOTOS OF CLOUDS, OR EVEN APPROACHING STORMS, AND WISHED YOU HAD CAUGHT THAT PHOTO?  YOU CAN, AND TRY TO BE THE ONE TO BE A "SKY" SCRAPE PHOTOGRAPHER.

It’s a common habit among photographers to always make a point to carry a camera around for those “just in case” moments. Many great photographs were captured this way and the image below is no exception. The photographer, based in the Netherlands, took the shot just as the sun was receding into the plane to create the stunning image:

Using a Canon 650D and a Sigma 18-35mm, the photographer says he was enamored with the dramatic feel of the sky and took that into consideration when selecting the composition. He says the only editing he added to the image was a slight increase in clarity and contrast.


“The colors were like this in real life. It was an amazing evening. Will never forget it.”**

THE RULE WITH TAKING PICTURES OF THE SKY, ESPECIALLY WHEN THE CLOUD IS THE MAIN SUBJECT IS TO MAKE SURE THE SKY HAS NO CLUTTER OR OBJECTS IN THE FOREGROUND TO DISTRACT FROM THE CLOUDS.  LIKE AN APPROACHING STORM CLOUD, MAKE SURE THAT YOU HAVE NOTHING IN FRONT OF THE CLOUD THAT WOULD DISTRACT THE VIEWER FROM THE CLOUD.  THE SUBJECT IS THE CLOUD, AND THAT IS HOW IT SHOULD BE.

WELL KNOWN SUBJECTS CAN BECOME EVEN MORE SPECIAL IF YOU CAN WAIT FOR A LITTLE MORE DRAMATIC EFFECT IN THE BACKGROUND.  LOOK FOR THOSE PUFFY CUMULUS CLOUDS TO ADD A LITTLE MORE BEAUTY AND "PIZZAZ" TO THE PHOTO.  EVERYBODY GETS A PHOTO OF THE "ARCH", BUT, HOW MANY GET A GORGEOUS PHOTO LIKE THE ONE ABOVE WITH BEAUTIFUL PUFFY CLOUDS IN IT?  MAKES IT MORE OF A MASTERPIECE. 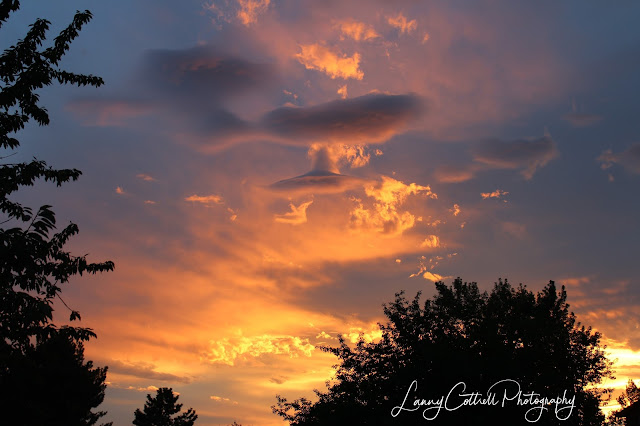 OF COURSE, EVERYONE TAKES PICTURES OF SUNSETS.  THIS IS SOMETHING THAT EVERYONE TAKES PICTURES OF.  BUT, THERE IS SPECIAL WAYS TO DO SUNSETS.  SOMETIMES LOOKING AT SUNSET PHOTOS CAN BE BORING.  BUT, WHAT MAKES SUNSET PHOTOS MORE DRAMATIC THAN EVER IS IF YOU CAN GET TWO THINGS TO HAPPEN.  THIS PHOTO HAPPENS TO HAVE BOTH, AND THAT IS RARE, BUT, IF YOU CAN HAVE AT LEAST 1 COMPONENT, YOU MAY HAVE A REAL KEEPER.  AND THAT IS 1-  DRAMATIC CLOUDS TO YOUR SUNSET.  AND 2 SOMETHING IN THE FOREGROUND THAT WILL MAKE IT HAVE DEPTH.  IN THE ABOVE PHOTO, THERE IS ONE MORE THING THAT MAKES THIS UNIQUE, AND THAT IS THAT WE HAVE THE "TWILIGHT COLORS" AS WELL IN THIS PHOTO.  THAT IS WHEN YOU GET THE "BLUES'  AND THE PURPLES OF THE SKY, WHICH USUALLY HAPPENS AFTER THE SUN GOES DOWN.  THIS PHOTO JUST HAPPENS TO HAVE IT ALL...... AND NOTHING WAS ENHANCED OR RETOUCHED ON THIS.

IF YOU DECIDE TO MAKE THE SKY ONE OF YOUR MAIN POINTS OF YOUR PORTFOLIO, THEN YOU MUST LEARN TO BE PATIENT.  WHEN TAKING PICTURES OF SUNSETS, YOU MAY TAKE MORE THAN 10 PHOTOS OF THE SUNSET AS IT PROGRESSES THROUGH IT'S CONCLUSION.  BUT ONE OF THOSE PHOTOS COULD BE THE MOST COLORFUL, MOST INCREDIBLE PHOTO YOU HAVE EVER TAKEN.  PATIENCE IS DEFINITELY ONE OF THE BEST THINGS YOU WILL EVER LEARN TO BECOMING A GREAT PHOTOGRAPHER, EVEN IN TAKING PICTURES OF THE SKY.

BE SURE TO VISIT OUR STORE.  HERE ARE JUST A FEW EXAMPLES OF WHAT WE HAVE:

VISIT OUR STORE AT:
www.123photogo.myshopify.com