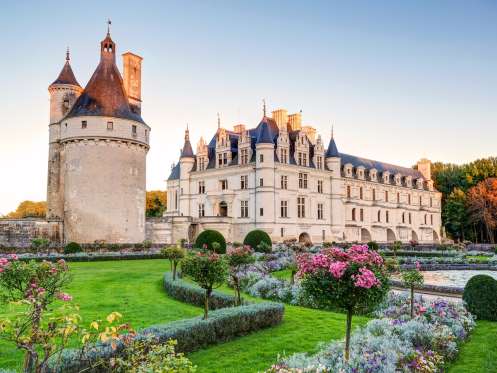 Many of the fairy tale castles we grew up with are inspired by real-life places - places that you can visit.
We rounded up some of the most majestic castles (and a couple of palaces too) around the world, from a medieval castle in a walled city in Wales to a château sitting on the shores of Switzerland's Lake Geneva. 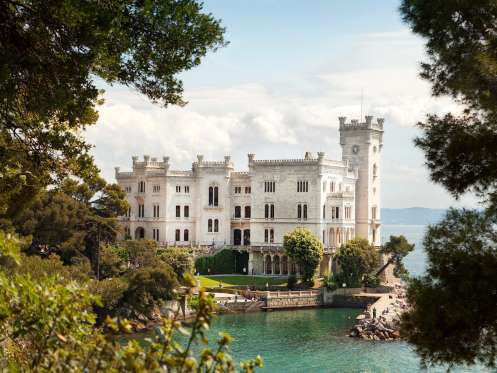 Although it sits on the Italian Gulf of Trieste, Miramare was built for an Austrian Archduke and his wife. The castle combines gothic, medieval, and Renaissance architecture, and is surrounded by a beautiful park.

CASTLES AROUND THE WORLD THAT LOOK LIKE THEY ARE FROM FAIRY TALES ! 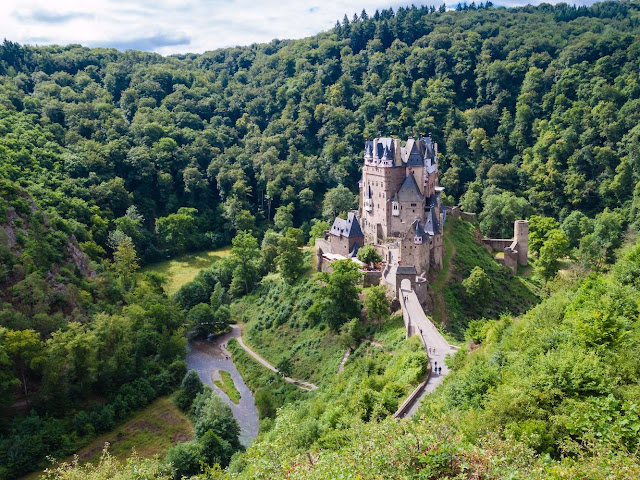 Eltz Castle is still owned by the Eltz family - a family that has owned and lived in the castle for 33 generations, starting in the 12th century. It sits in the picturesque forests of Western Germany's Rhineland. 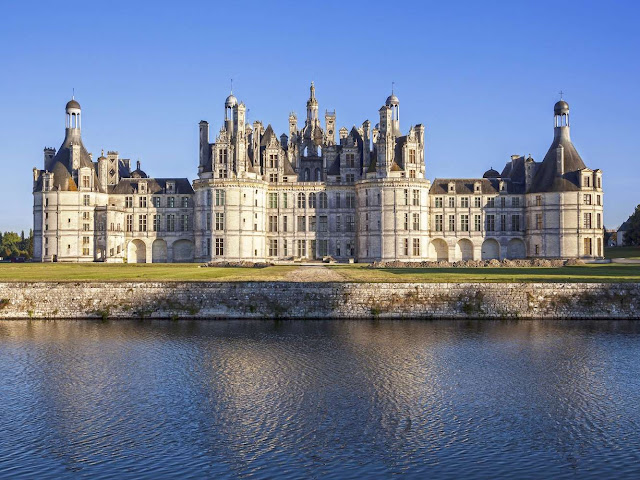 Château Chambord is one of France's best examples of Renaissance architecture. The château was constructed in the 16th century, and has remained relatively unchanged since then. Walt Disney used it as inspiration for the Beast's castle in "Beauty and the Beast." 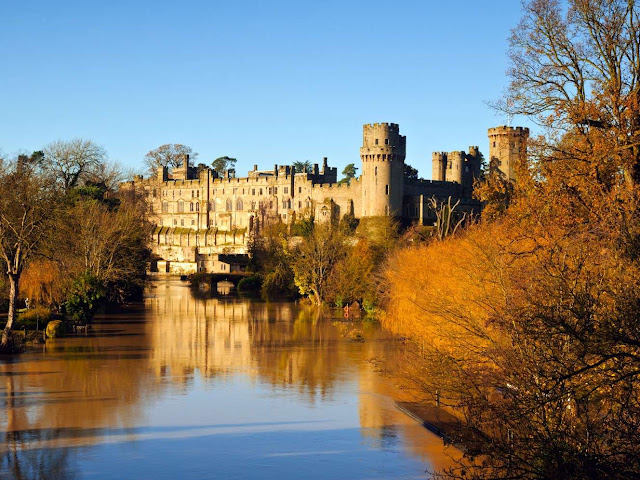 Warwick Castle started out as a wooden structure, before being rebuilt into stone in the 12th century. It was a stronghold for many years, and was converted into a country home in the 17th century. It's currently owned by an entertainment company. 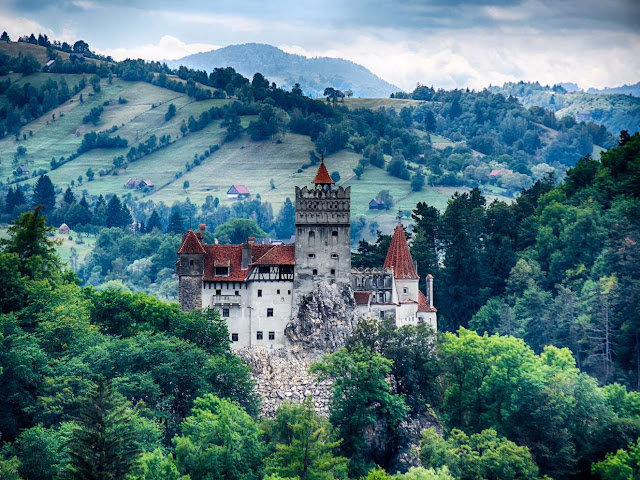 Perched atop the lush hills of Transylvania, Bran Castle has a rich history that dates back to the 14th century. Queen Marie of Romania frequented the castle, but most people know it as the inspiration behind Count Dracula's castle. 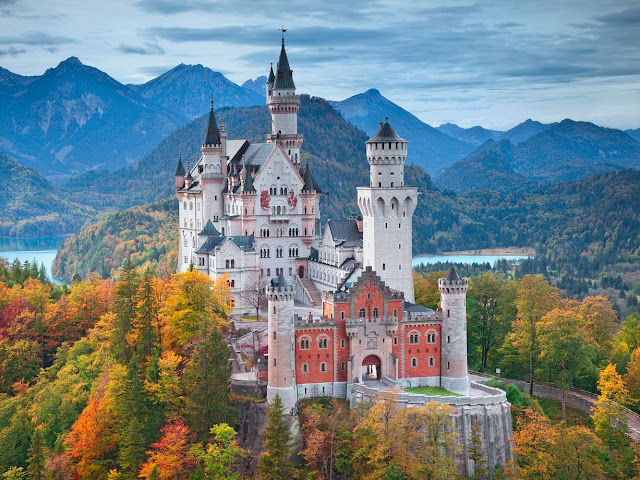 Neuschwantstein served as the inspiration for not one but two Disney castles (Cinderella's and Sleeping Beauty's), and was originally built in the 19th century by King Ludwig II. Nestled high up in the forests of southwestern Bavaria, this castle was meant to be a retreat for the king. 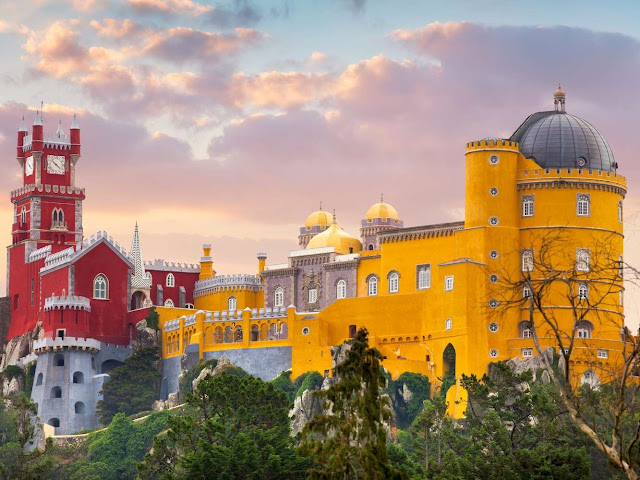 Pena Palace, Sintra, Portugal
Photo by:   Taiga / Shutterstock
This colorful palace is a prime example of 19th century Romanticism in architecture, though it also features Moorish influences. Pena was built by King Ferdinand the II, who wanted the palace to be visible from any part of the beautiful park it sits in. 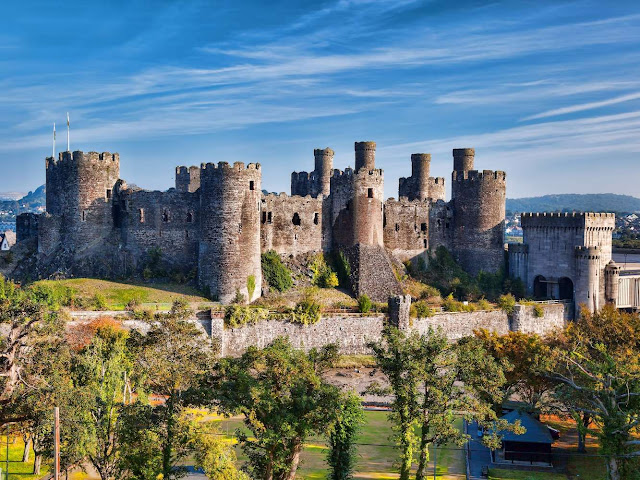 Conwy Castle, Conwy, Wales
Photo by: Samot / Shutterstock
Constructed by Edward I during his conquest of Wales in the late 13th century, Conwy Castle is located in a walled medieval town, and is one of the best-preserved tourist attractions in Northern Wales. 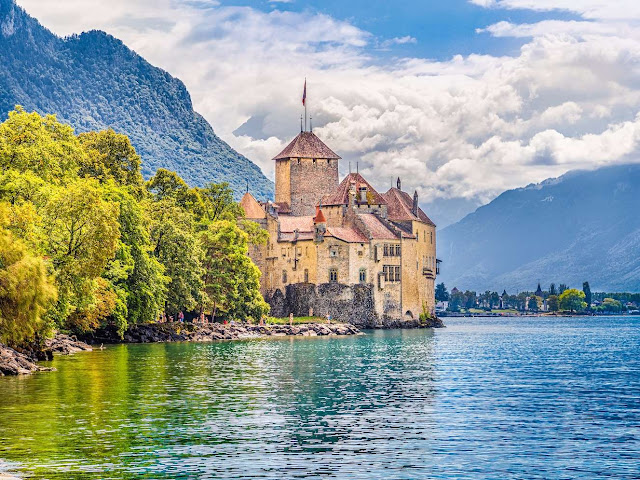 This island castle sits on the shores of Lake Geneva and helped inform Walt Disney's vision for Prince Eric's castle in "The Little Mermaid." The château also inspired various writers, like Jean-Jacques Rousseau and Lord Bryon. 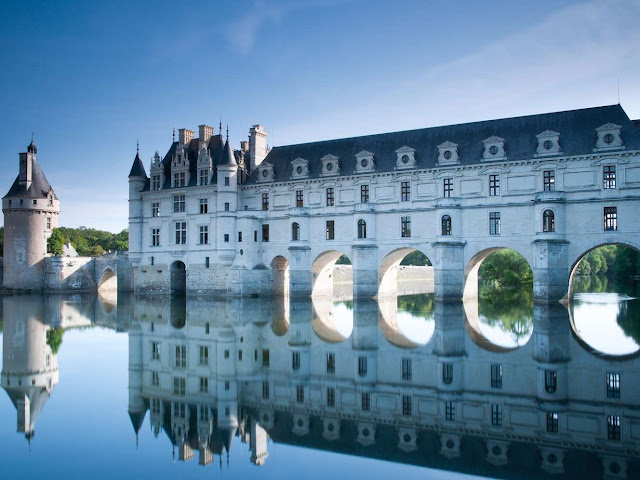 Château de Chenonceau, Chenonceaux, France
Photo by:  stocker1970 / Shutterstock
Dating back to the early 1500s, Chenonceau was built right over the River Cher. The château also served as inspiration for Walt Disney in his creation of Cindarella's castle. 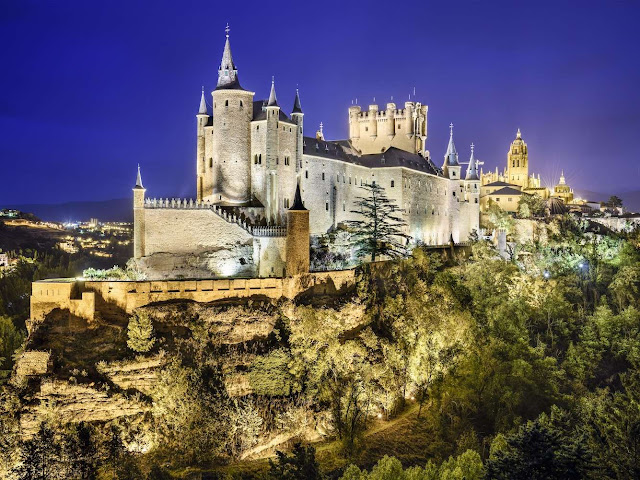 The Alcázar of Segovia offers stunning views of the city of Segovia. It started off as the fortress of the Kings of Castile, then turned into a royal palace, then a state prison, and then a royal college of artillery. It's now a museum, and one of Spain's most popular monuments. 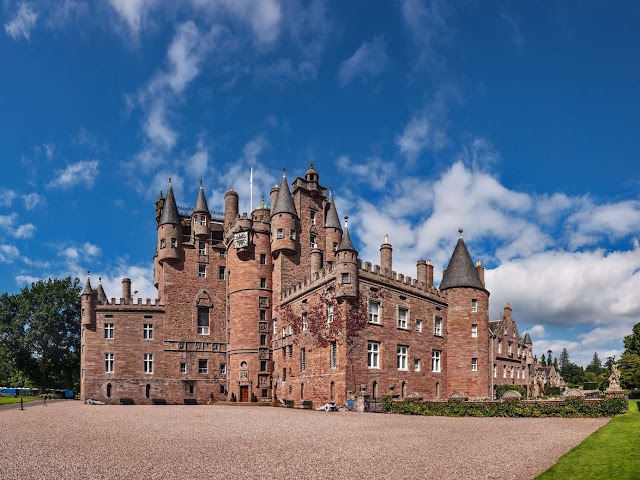 Glamis Castle has impressive credentials: It was the setting for Shakespeare's "Macbeth," as well as the childhood home of Queen Elizabeth. Glamis is currently inhabited by the Strathmore family, who inherited the castle in 1972. 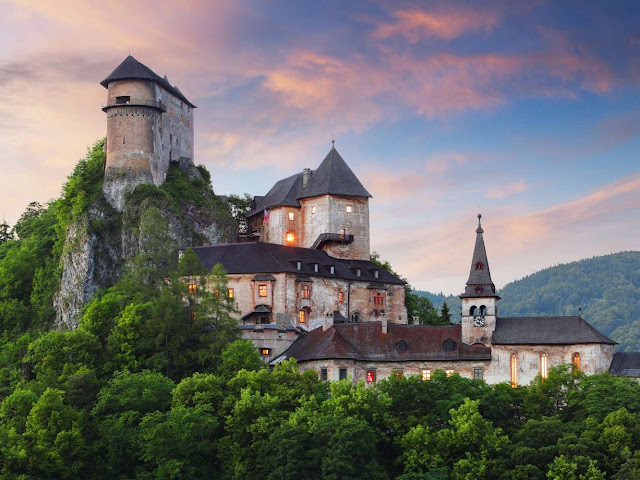 The Orava Castle, which is perched on a rock above the Orava River, served as a military and administrative center for Slovakia's Ovara region; it also protected a critical road leading to Poland. The castle dates back to the 1200s, but was rebuilt in the 1800s after a fire. 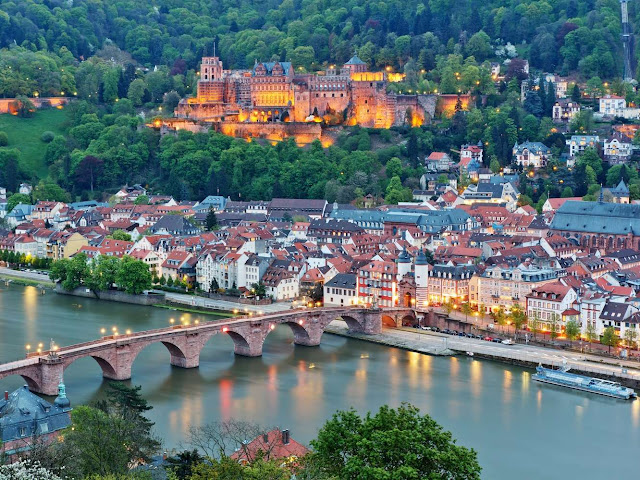 Overlooking the city, Heidelberg Castle was used as a residence for over 400 years, until it was struck by lightning in the late 1700s. The castle is now mostly ruins: for a time citizens even used its stones to build their own homes. 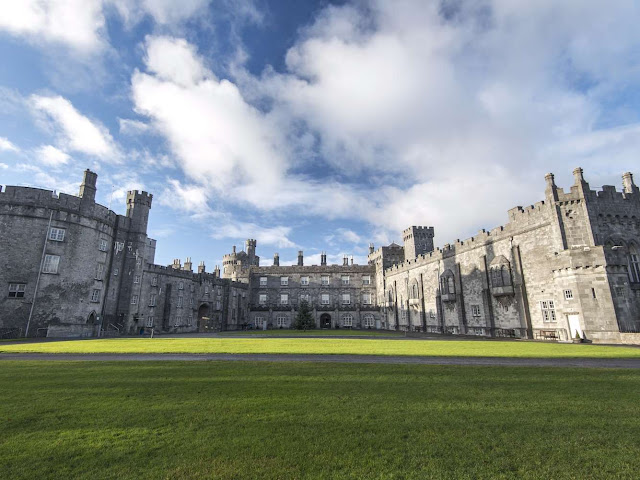 In the late 1960s, the Kilkenny Castle was turned over to the inhabitants of Kilkenny. Before then, it served as the residence of the Earl of Pembroke and the Butler family. Due to a number of renovations and additions made throughout the years, the castle is a combination of a plethora of architectural styles. 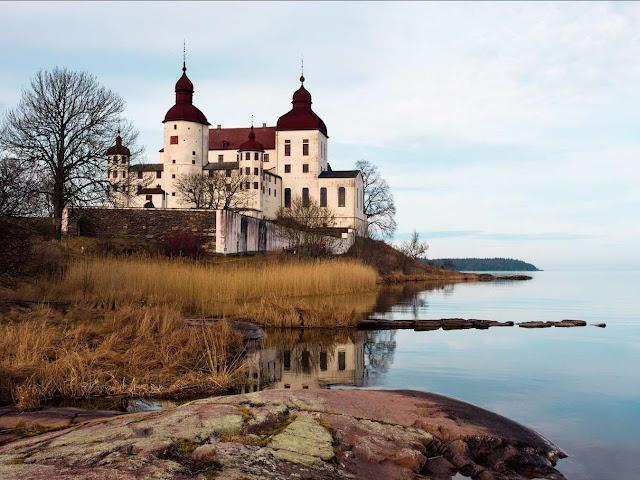 On the shores of Sweden's largest lake - Lake Vänern - Läckö Castle was built in the Baroque style. Visitors should check it out for concerts and exhibitions that are held there throughout the year. 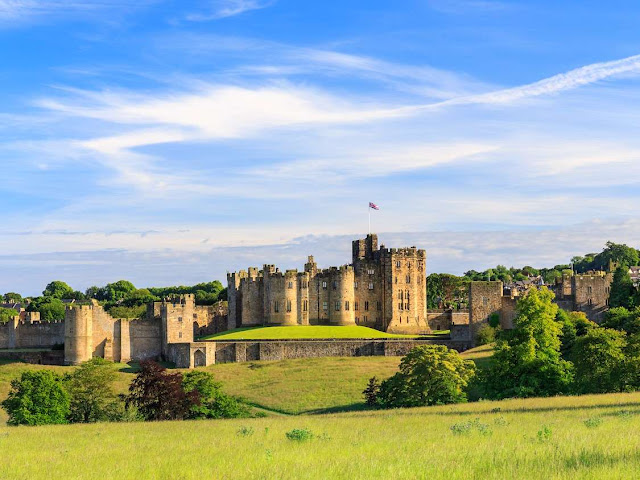 Alnwick Castle, Alnwick, England
Photo by:  iLongLoveKing / Shutterstock
Still inhabited by the Percy family - the castle has been in that family for more than 700 years - Alnwick Castle is the seat of the Duke of Northumberland. It was constructed in the 11th century, after the Norman Conquest. 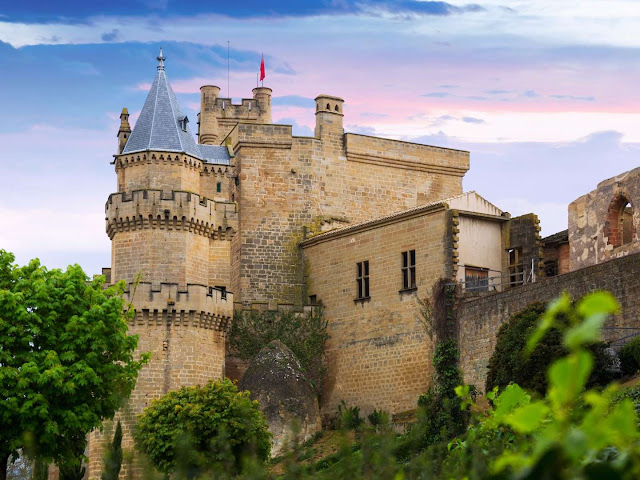 The Olite Palace has been described as a symbol of opulence and elegance during the Middle Ages. It was known for its gilded rooms and exotic garden and zoo, as well as for the jousting and bullfighting tournaments it hosted. 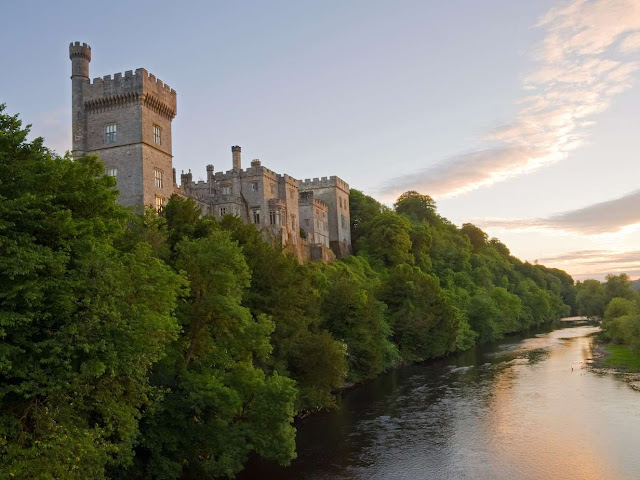 Just a personal note on these gorgeous 20 photos of these castles:  I think these photos look so much better when taken by the professionals that took these photos.  As I put these photos on this blog, I couldn't help but think that these photos only become amazing because the photographer took them at the right time of day, with the right conditions, the right angle, etc.  And this is why I like to do these gorgeous galleries.  So, we can learn from these photographers.  Sometimes, I think those who live in this area are thinking:  this castle doesn't really look this good.  So, everyone make sure you find the things that will make these kind of subjects fantastic, whether it be the time of day, the angle of the subject, etc.  Look for the artistic value in the picture.

Email ThisBlogThis!Share to TwitterShare to FacebookShare to Pinterest
Labels: PHOTO GALLERY OF CASTLES THAT LOOK LIKE FAIRY TALE CASTLES.