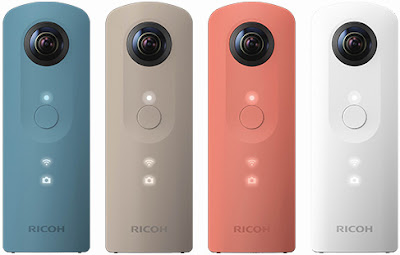 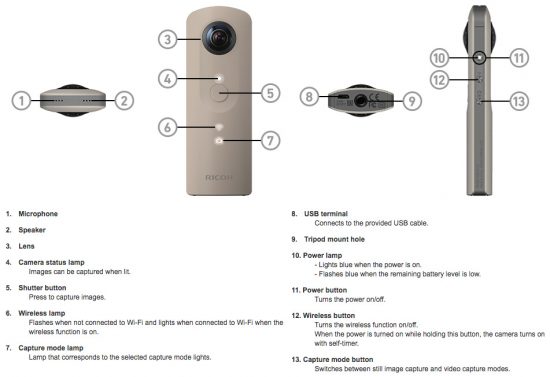 The Ricoh Theta SC camera is now officially announced. The US price is $296.95 and shipping will start on October 28th. Pre-orders are now open at B&H and Amazon.


Ricoh Theta SC camera features:
1. High-resolution, fully spherical images
The Ricoh Theta SC delivers high-resolution, fully spherical images with an approximately 14 megapixel output, thanks to the combination of bright, large-aperture twin-lens folded optics (with the same f/2.0 maximum aperture as the Theta S) and a large image sensor. Together they capture beautiful 360-degree images with minimal noise, even in low-light conditions. The completely redesigned user interface of the Theta app for smartphones and tablets provides intuitive operation, allowing users to easily make adjustments, change settings, upload images and much more.
The Ricoh Theta SC allows the user to upload spherical images to the theta360.com dedicated website, and share them on social networks such as Facebook, Twitter, Instagram and Tumblr. It is also possible to submit captured videos to 360-degree channels such as Google MapsTM, Google+TM and YouTubeTM.
2. High-resolution, fully spherical videos
The Ricoh Theta SC captures high-resolution, fully spherical videos at Full HD quality (1920 x 1080 recorded pixels, 30 frames per second) for a duration of up to five minutes (after a synthesizing process). Once transferred to a smartphone or tablet using the Theta app, users can adjust the image size, shape and composition of videos with simple fingertip operation. Using the dedicated THETA+ Video image-editing applications,* users can easily edit captured videos.
Just like fully spherical still images, the edited videos (a maximum data capacity of 5MB) can be uploaded to the theta360.com dedicated website, and shared on social networks.
THETA+ Video applications operate on iOS8.0. or later, or Android 4.4 or later. Proper operation is not guaranteed with all mobile devices.
3. 360-degree Live-view display
When synchronized with a smartphone or tablet computer, the Ricoh Theta SC provides Live-view display (still images only) on the device’s monitor. This allows the user to check the outcome of various setting changes on the Live-view screen during shooting. The camera provides a choice of two display modes: Full Screen and Panorama.
4. Stylish and functional body design
The Ricoh Theta SC is equipped with an LED indicator on its front panel for at-a-glance confirmation of the current mode, and a still-image/video switching button on the side panel. These controls let users operate the camera smoothly and unerringly even when it is disconnected from a smartphone or tablet computer.
5. Other features
• A large internal memory (approx. 8GB) for storage of approximately 1,600 still images (at L image size)
• Minimum start-up time lag of 1.5 seconds
• Self-timer function, with a delay time selectable from the Theta, smartphone or tablet
• Interval shooting function, convenient for creating time-lapse videos
• The THETA+ application can be used to edit still images and export images for printing

Newest addition to Ricoh’s pioneering Theta line makes it easy for anyone to shoot and share high-quality spherical stills and videos, available in four colors
WEST CALDWELL, NJ, October 12, 2016 – Ricoh Imaging Americas Corp. today announced it has added a full-featured, affordably-priced mid-range model to its pioneering line of Theta 360-degree spherical imaging cameras. Merging advanced imaging capabilities with simplified operation, the new Ricoh Theta SC is designed to appeal to the growing numbers of consumers interested in capturing and sharing 360-degree photos and videos.
Market demand for cameras that capture immersive imagery is on the rise, and experts predict that devices required for augmented- and virtual-reality experiences—such as 360-degree cameras and VR headsets—will be at the top of consumers’ holiday 2016 gift lists.
Ricoh offers the industry’s most extensive line of spherical imaging cameras, known for their high image quality, sleek design and ease of use. First introduced in 2013, Theta cameras are unique in their ability to allow consumers to record fully spherical images that show the entirety of a scene in photos or videos. The pocket-sized Theta SC is the fourth-generation Theta, joining the award-winning, top-of-the-line Theta S and entry-level Theta m15 series cameras.
Like its predecessors, the Theta SC boasts a stylish and sleek design, lending itself to quick and convenient operation. The camera can be handheld with one-button operation or placed on a flat surface or tripod to be remotely controlled by a smartphone and the newly updated Theta S app. It comes in a range of attractive colors including beige, blue, pink and white for a wide range of users.
The Theta SC delivers the same high level of image quality provided the Ricoh Theta S—with a high-performance CMOS image sensor and large-aperture dual lenses—in a more lightweight package. It captures 14-megapixel, high-resolution stills and records high-definition (HD) video clips up to five minutes in duration, in keeping with consumers’ interest in shooting and sharing short video clips. The resulting spherical images can be easily uploaded to the dedicated theta360.com website; posted and shared via Facebook, Google+, Google Maps and YouTube; as well as shared via Twitter and Tumblr.
With the introduction of the Theta SC, Ricoh is also unveiling an updated Theta S app for iOS and Android devices. The newly updated Theta app is designed to be even easier to use—making capturing, viewing, managing and sharing fully spherical imagery a snap.
“Our goal is that the Theta SC will introduce more people to 360-degree spherical imaging,” said Kaz Eguchi, president, Ricoh Imaging Americas Corp. “With the growing popularity of immersive imagery, augmented and virtual reality, we wanted to produce a high-quality camera at an affordable price point that appeals to anyone who is interested in capturing and sharing the world around them in this new, exciting digital imaging format.”
The Ricoh Theta SC is now at www.ricohimaging.com and retail outlets nationwide for a manufacturer’s suggested retail price of $299.95.
Additional information on Ricoh Theta cameras can be found on this dedicated website: theta360.com. 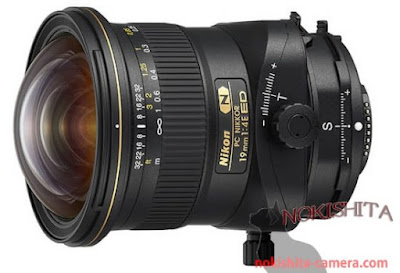 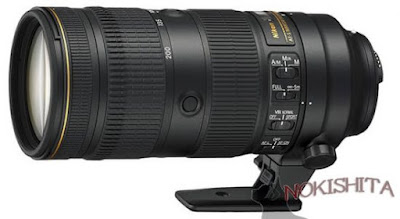