YOU MAY HAVE SEEN SOME OF THESE ON TV.  SOME OF THESE ARE SO DIFFERENT, VERY FEW HAVE SEEN THESE MUSICAL INSTRUMENTS.  BUT, THEY ARE OUT THERE, AND THIS KIND OF STUFF HAS ALWAYS INTRIGUED ME.   I HOPE YOU WILL FIND THIS INTERESTING.

AS I GO THROUGH SOME OF THESE, I WILL GIVE YOU THE DESCRIPTION OF THE INSTRUMENT, PLUS LET YOU HEAR THE INSTRUMENT, SO YOU CAN GET A FEEL FOR WHAT IT REALLY CAN DO.  I HOPE YOU ENJOY THIS ENTERTAINMENT WEEKEND SPECIAL:

The unique tone of the HAPI Drum, available at HapiTones.com is created by a tuned vibrating tongue of steel. HAPI Drums now come in 4 different sizes and models: our original instrument, the HAPI Origin, the larger HAPI UFO Drum, the HAPI Slim Drum, and its new little brother, a mini HAPI Drum, aptly named the HAPI Mini Drum, the little HAPI with a BIG sound! The concept is similar to a wooden tongue drum. When a tongue is quickly and lightly struck with the finger or mallet, it vibrates creating sound waves. Playing a HAPI is similar to playing the Hang Drum, though the similarities end there, as it is a totally different type of musical instrument. By changing the shape and length of the tongue, optimal vibration and perfect tone is achieved. By arranging the notes in a unique way each note, when struck, excites surrounding notes that are musically compatible with it. This adds to the harmonic spectrum of the tone. Rather than just one tone it can now create a spectrum of supporting sound for each note. The tone is similar to singing bowls or musical bells which create multiple harmonic overtones. The body of the drum acts as a resonating chamber adding depth to the note. An opening port in the bottom of the drum serves three functions. The bottom hole allows the sound to escape and increases the volume. It releases the tone from the body so that the notes do not overlap each other too much. This is especially desirable for faster playing. It allows the player to open or close the port with their lap and chose different resonance levels for a different effect. The HAPI Drum has additional dampening of the notes and drum body to keep the drum from becoming discordant and “ringy”. The breakthrough proprietary technique built into each drum provides excellent resonance while supplying the correct amount of dampening.

The HAPI Drum is played with the pads of the fingers, or with soft mallets. A wide range of sounds can be created with different techniques. Playing by hand connects you with the drum in the way that traditional drums are enjoyed. A minimal amount of force creates a big sound on our drums. Our mallets eliminate the percussive “head slap” creating a very clear tone. The arrangement of the notes make going up and down the scale very easy. Also one hand can reach two or three notes simultaneously for chord playing. HAPI Drums are available in 5 different pentatonic scales in the keys of E and D with 8 notes. 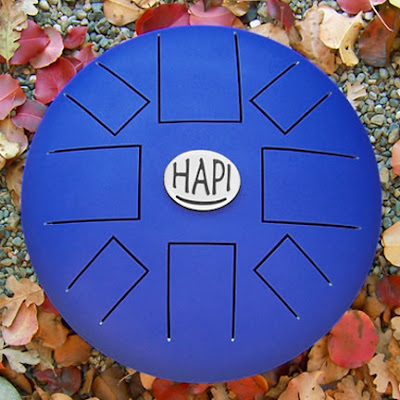 Click here to listen to this unique sound of the HAPI DRUM.

DULCIMER:
The dulcimer is one of the few original American musical instruments. It's ancestor, the scheithlot, was found in the late 1700's in Pennsylvania. The Appalachian people changed this instrument and came up with the dulcimer in the 1800's. The word dulcimer means "sweet song", and that describes it well. The Appalachian dulcimer is shaped like an hourglass, or like a woman, as many say. In those days women playing a stringed instrument were not allowed to stand in front of the men. So, they played the dulcimer, which was played on the lap. Originally the dulcimer was strummed with a quill. It can be played with a pick, bowed, fingerpicked, or with a short piece of dowel called a "noter". Different playing styles are used to bring out different sounds. Many chords can also be played on this instrument. Dulcimers are handmade and very beautiful. Most dulcimers have three to five strings, and while tuning modes can vary, usually only the first string is used to play melody, while the other strings provide drone accompaniment and backing chords.
This dulcimer was custom made by the late Homer Ledford (1926-2006) of Kentucky, considered to be a legend and master craftsman of the instrument. It is made from Yellow Poplar wood that is over 100 years old, salvaged from planks that were once slave cabins.
A traditional way to play the instrument is to lay it flat on the lap and pluck or strum the strings with one hand, while fretting with the other. In practice, a wide variety of playing styles are used. For solemn church and parlor music, a bow was traditionally favored, but in faster dance music, the dulcimer was plucked and strummed. When four strings are used, the first two strings are placed close together and tuned the same. This can be used to emphasize the melody, while the other two strings are used as drone strings. Some dulcimers are constructed to allow the strings to be arranged with either a "double melody string" (as described above) or with the option of four equidistant strings. The traditional way to play the dulcimer is to utilize the "one melody string and two drone strings" approach. Players who employ this method are known as "noters". More contemporary play has borrowed from chord theory and guitar analogues to create a variety of more complex ways to play the dulcimer. The Appalachian dulcimer is both easy to learn to play and yet capable of complexity, providing scope for a wide range of professionals and hobbyists.

LISTEN TO THIS DULCIMER.  IT IS A BEAUTIFUL INSTRUMENT.

The Harp Guitar is a 20-string instrument, shaped much like a guitar, but with an extended second neck, stretching above the main neck of the instrument. This second neck holds seven unfretted bass strings, which are plucked like those of a harp. The six central strings are fretted on the standard guitar neck, and are frequently strummed like on a standard guitar. There are also eight unfretted treble strings below these "guitar" strings, which are also plucked.

Michael Hedges (1953-1997) is a name well known among harp guitar aficionados. The 1986 release of his composition "Because It's There" can be credited with reawakening a great deal of interest in an instrument that had become little more than a pawn shop curiosity. Michael was also known for changing the way people play the guitar. He pioneered the use of slapped harmonics, percussive use of the guitar body, and 2-handed tapping techniques. He was always searching for new sounds with his 6-strings, his harp guitars, an even a few instruments without strings. Michael used Dyer harp guitars and a custom made Klein electric harp guitar. Sadly, Michael was killed in a car accident in 1997.

I've heard this before and love this instrument.   You have to hear this.  The late Michael Hedges performs this Harp Guitar.

The Stoessel-laute, or lute-zither (part zither, part lute) was invented by violin builder Georg Stoessel in 1914, and available through the 1920's. There were several sizes and configurations - this contrabass being the largest. 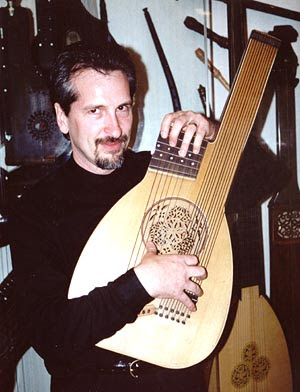 In response to the mass production of cheap autoharps, the Cologne violin builder invented an instrument which united characteristics of both zithers and lute-like instruments. It had a flat, zither-like body with a lute-like shape, sides and arched top, a short, wide neck, a fretboard with three or at the most five frets. The strings are fretted by reaching the hand over the headstock and top saddle, parallel to the path of the strings themselves.
The design represents a compromise between simple chordophones, like zithers, and necked chordophones. The neck was minimized, so were the numbers of frets. In order to make possible the grip over the headstock, the strings and their fastenings were set into the neck and the tuners were located on the body. Although one may look upon the seven string Stössel lute as a basic style, the inventor experimented with a number of shapes and models.

This is a very rare instrument that isn't really made anymore.  So, it has a sound of the older era.

THERAMIN:
The theremin (/ˈθɛrəmɪn/[1] THERR-ə-min; originally known as the ætherphone/etherphone, thereminophone[2] or termenvox/thereminvox) is an early electronic musical instrument controlled without physical contact by the thereminist (performer). It is named after the Westernized name of its Russian inventor, Léon Theremin (Термéн), who patented the device in 1928.
The instrument's controlling section usually consists of two metal antennas that sense the relative position of the thereminist's hands and control oscillators for frequency with one hand, and amplitude (volume) with the other. The electric signals from the theremin are amplified and sent to a loudspeaker.
The theremin was used in movie soundtracks such as Miklós Rózsa's Spellbound, The Lost Weekend, and Bernard Herrmann's The Day the Earth Stood Still. It has also been used in theme songs for television shows such as the ITV drama Midsomer Murders. This has led to its association with eerie situations. Theremins are also used in concert music (especially avant-garde and 20th- and 21st-century new music) and in popular music genres such as rock. 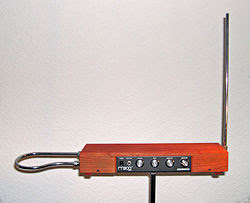 This has been used and televised recently.  And was even used on TV's "America's Got Talent".  It didn't get very far in the competition because no one was familiar with it and how difficult it was to play it.

Here is some more information and one of the best people that has studied how to play it, show you how it's done:

An amazing instrument.  And to think that it was invented back in 1928.  Amazing.

I'm going to add one more video to this.  I am thinking too many people think that this instrument cannot be played to be a beautiful instrument.  Or has anyone ever done this well enough to make this instrument in a higher class of it's own.  So, check this out: