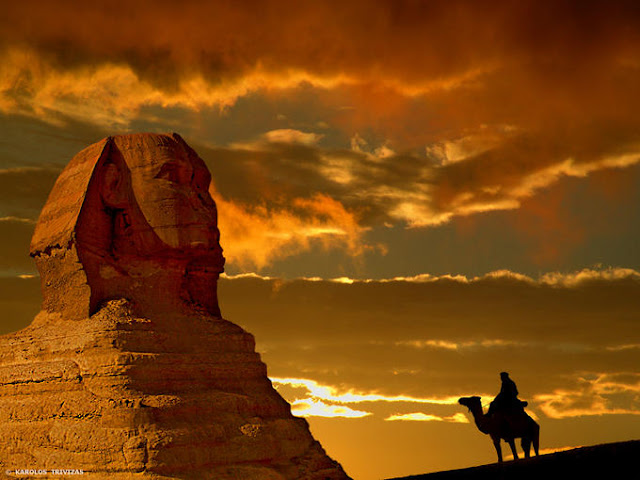 Have you ever wanted to see what type of photos win national photo contests?  Here is a sampling of some amazing photos that have actually won photo contests.
I don't have a listing of their prize awards, but, all that is listed is that these photos were the winners in their categories.  I am presenting different categories so you can get a sampling of all different types of winners. 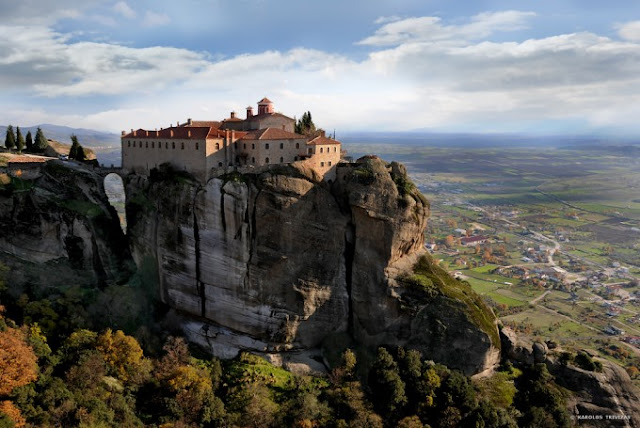 The monastery of Agios Stefanos in the region of Meteora in Central Greece. .......... In the same region, during the period between 11th and 14th century, on the top of similar huge monoliths, the Greek monks built 24 monasteries, in order to be protected from the bandits and pirates. .......... In the past the only access to this monastery was a small movable wooden bridge. .......... Today only 6 of the Meteora monasteries remain renovated in the region, while the rest are abandoned and ruined. .......... 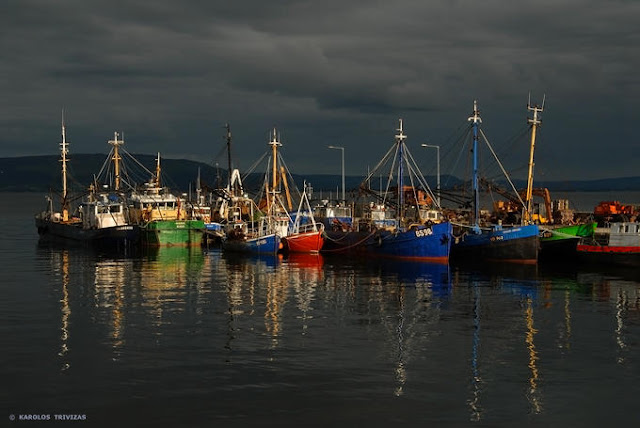 Ireland, Moville. .......... The pier at Carrickarory near Moville Co Donegal. .......... An idyllic port with colorful fishing boats, partly illuminated through a hole in the cloudy sky. .......... In Ireland I saw for the first time this -unusual for my country- climatic phenomenon of the sudden successions between a completely cloudy sky and a glorious sun, many times during the day. .......... During these changes, the glorious sun rays, passing through openings in the heavy lead colored clouds, create impressive lighting effects. .. 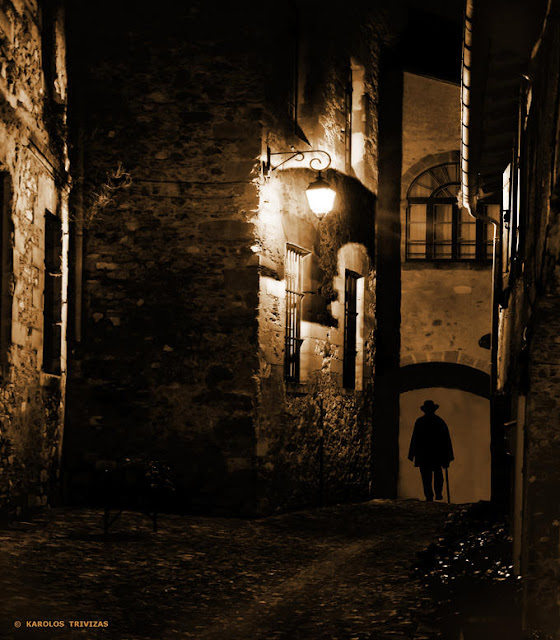 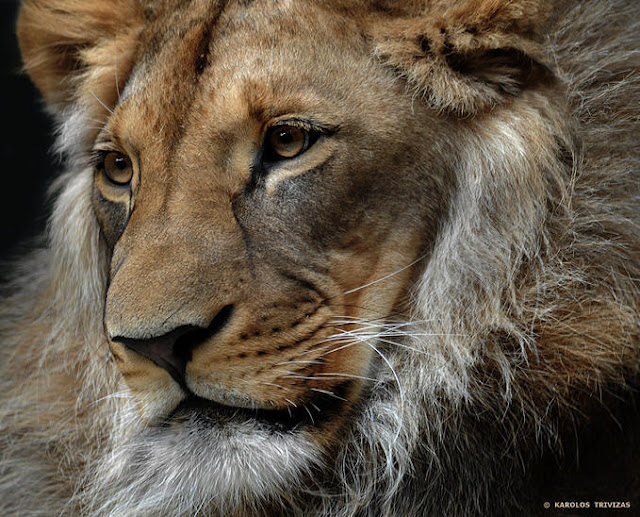 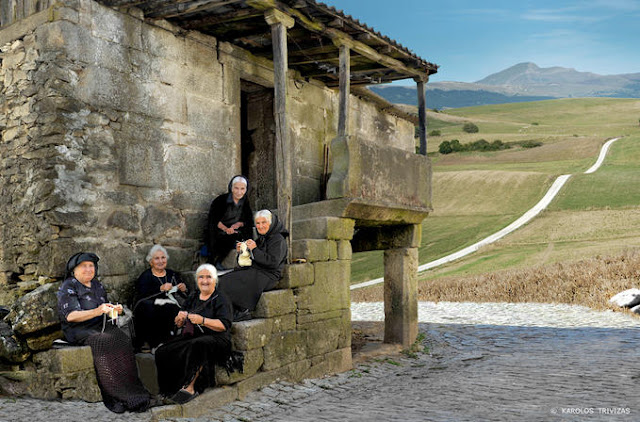 PORTUGAL – ALVITE . . .. A scene from the past….. in an isolated picturesque small village of central Portugal. These old ladies were knitting warm socks with woolen lisle from their sheep. Their gatherings are good opportunities for some gossip and exchange of village news. 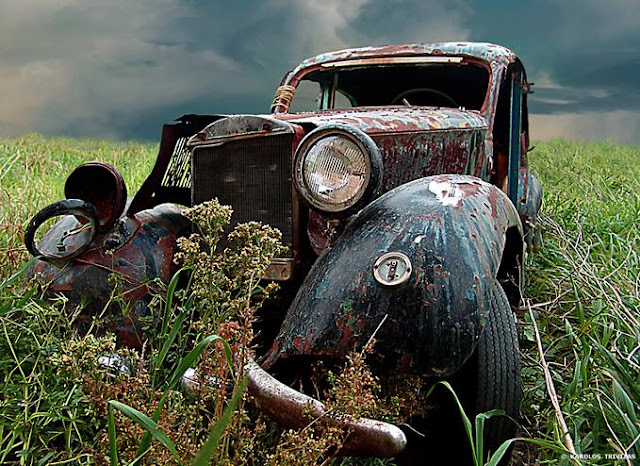 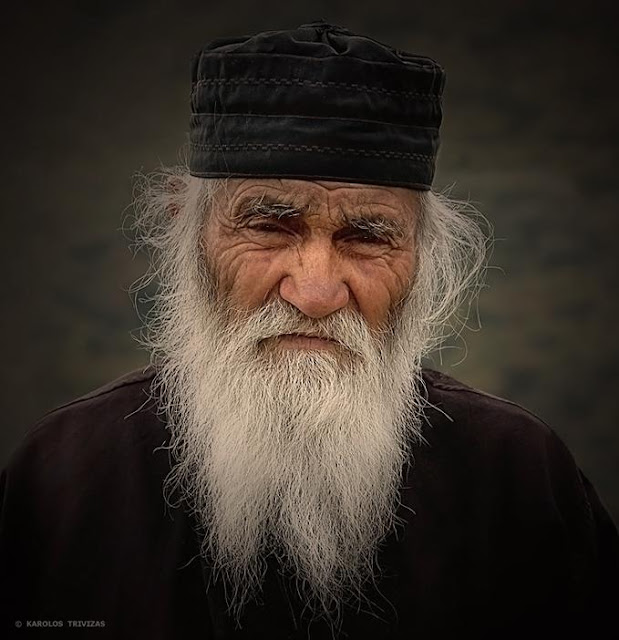 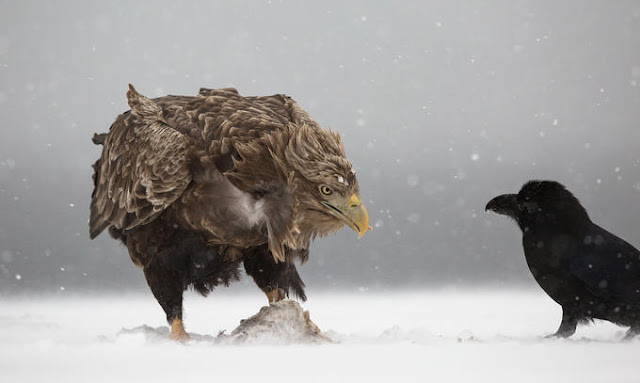 The white-tailed eagle, the fish & the crow 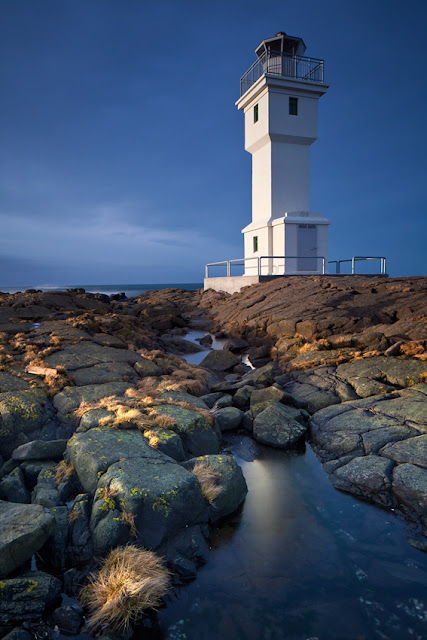 Old lighthouse of Akranes, Iceland. 30 sec at f/8 (but not enough clouds to get any clear effect 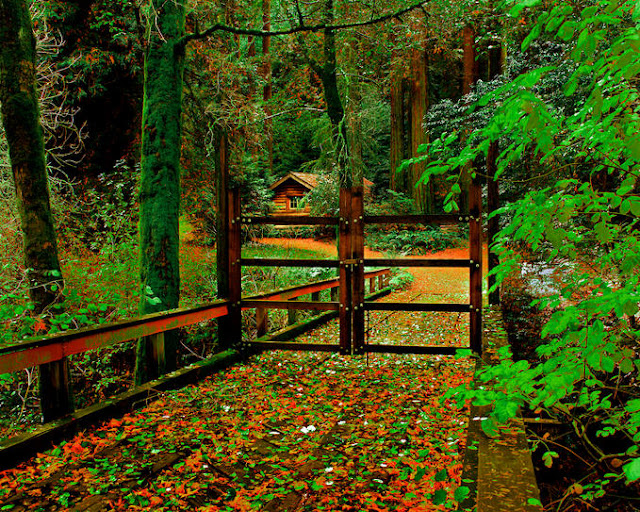 Thank you for stopping by. I caught this in the midst of a rain, and wind. As you can see the leaves blown all over. The exposure was 8 seconds, or longer with no correction for reciprocity. The film was Velvia 100. It was dark in there so I kept it that way. 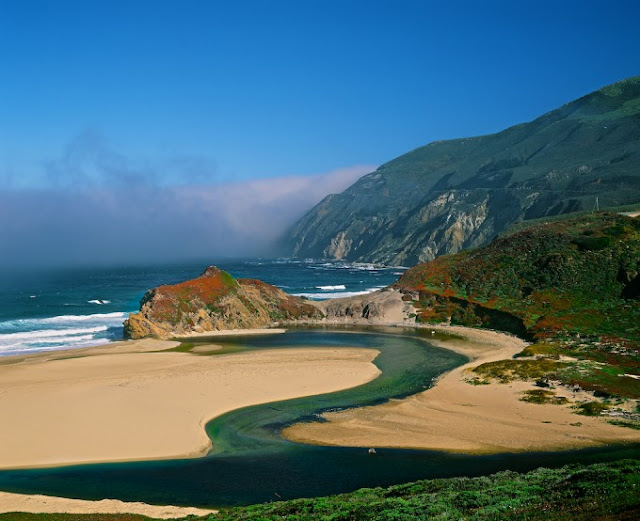 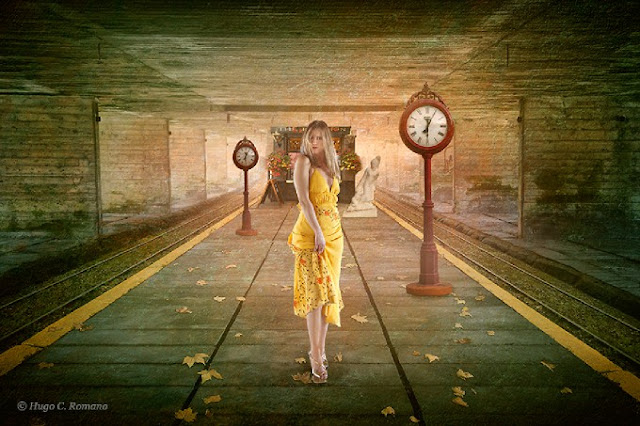 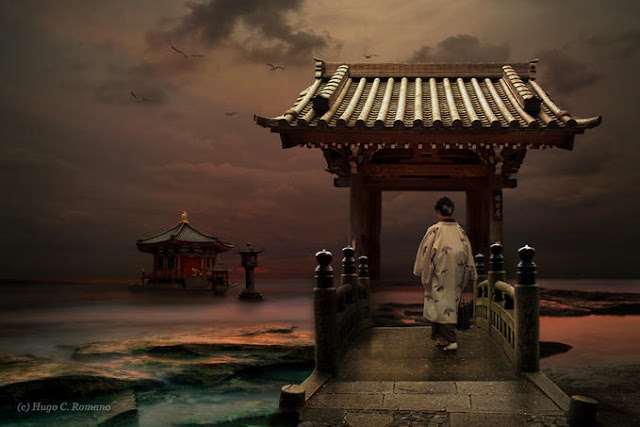 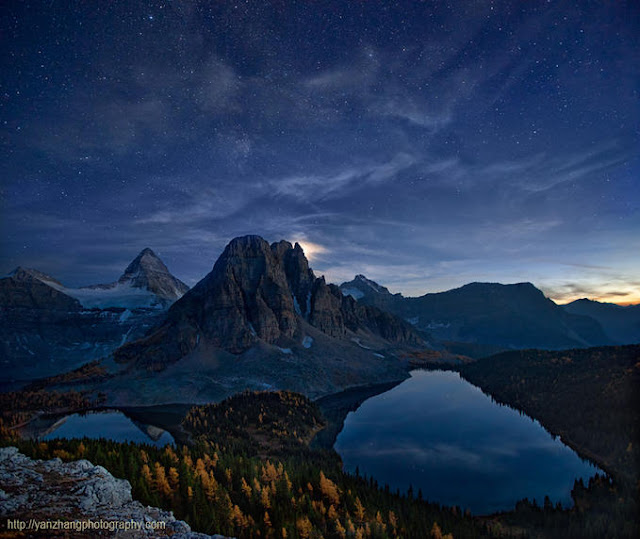 This image was taken on 21 September 2012, in Mount Assiniboine, Canadian Rockies. A dramatic sky appeared over Mount Assiniboine: after sunset, the rising moon was hidden behind Mount Sunburst while its light was burst from the peak, moving clouds crossed the starry sky and formed such magic patterns. 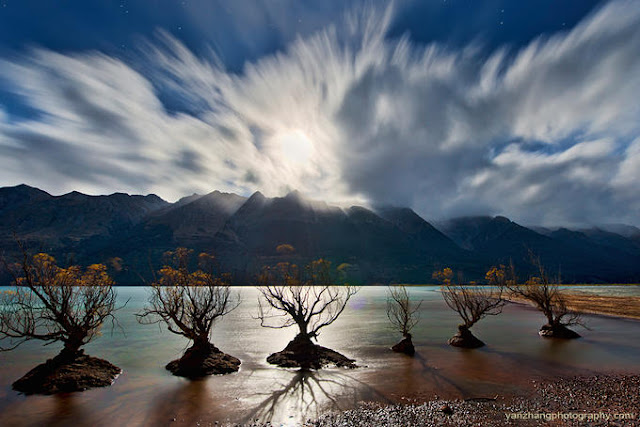 Glenorchy is a small settlement nestled in spectacular scenery at the northern end of Lake Wakatipu, about 45 km from Queenstwon. This image captured a dramatic moment of moonrise over Gelnmorchy in autumn time. 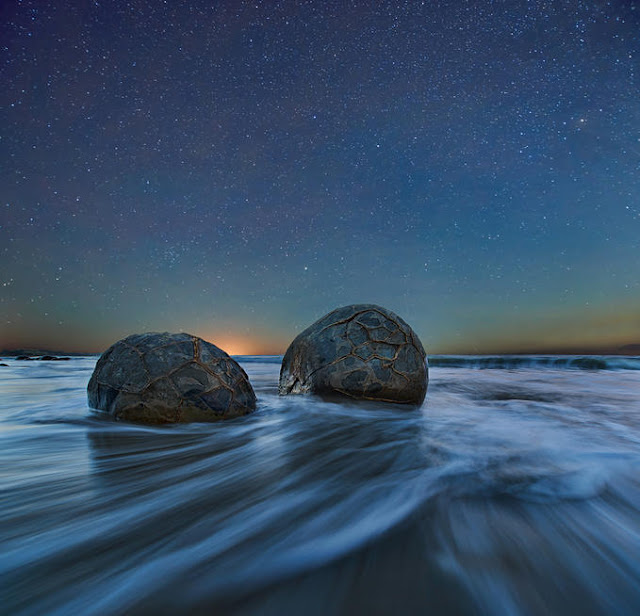 The Moeraki Boulders are unusually large and spherical boulders lying along a stretch of Koekohe Beach on the wave cut Otago coast of the South Island of New Zealand between Moeraki and Hampden. They occur scattered either as isolated or clusters of boulders within a stretch of beach where they have been protected in a scientific reserve. This photo was taken on 30 April 2013, the setting sun illuminated the light on the horizon as the sky was already filled of stars. 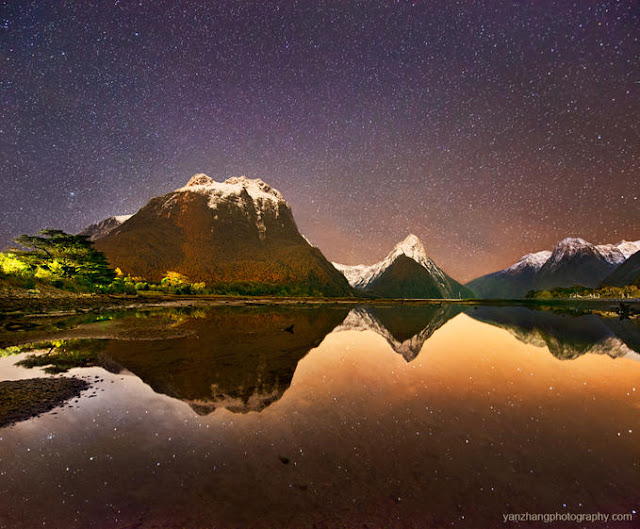 The World of Imagination

Milford Sound is a fjord in the south west of New Zealand's South Island, within Fiordland Nation Park. Because of its special geographic location, each year there are almost 300 raining days. Surprisingly, during our two-day staying in Milford Sound, it was sunny and cloudless, while I was told that just a week before, there was a fierce storm here and it even damaged a scientific facility in Milford Sound Observatory Centre. A starry sky was rarely seen in Milford Sound, as I was told by two local photographers in Milford Sound. Luckily, this time I saw it, and moreover, I was able to capture this magic scene of Milford Sound. This image was taken on 11 July 2013. The photography process was rather difficult. Nearly 3 hours before sunrise, it was very dark, but the sky was just dramatic through my camera. Since the tide was extremely low, I had to jump into the cold water from the other side in order to get a perfect reflection of the mountains. The water was freezing cold, about 0 degree. After standing there for nearly 2 hours with my wader on, my tripod was frozen by the end. But the result was rewarding.. 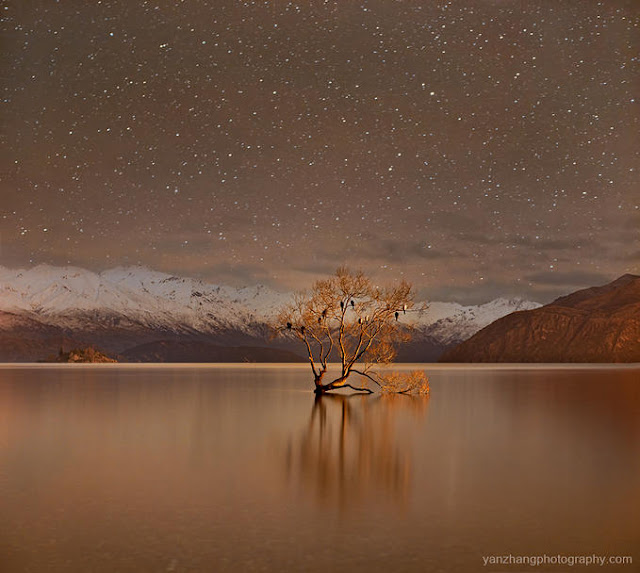 The Tree Is My Shelter (Please view in large)

It was a cold but calm night in Wanaka. The lake water level was surprisingly high such that the tree trunk was completely sunk under the water. But this tree was obviously a safe shelter for these little birds. Taking this image was not simple: as the water level was too high, there was no possibility to frame the scene that I was interested from the lake shore. Luckily, with my wader on, I was able to stand in the cold water for a long time to take my shots. 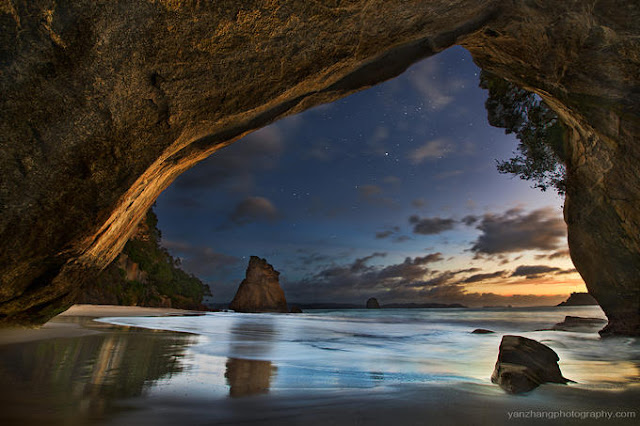 This Cathedral Cove is located in Hahei coast, about 2 hours drive from Auckland towards south east direction. Arriving in this place before 4.30am, I looked into the beautiful sky through this natural window.

These were all such amazing photos.  When I pick our "photos of the Week" on Thursday's I think those photos rival these photos.  So, it is refreshing to see what types of photos actually are winning photos on real contests.  We have collected photos from photographers who make it their business to enter photo contests, and as you can see they take wonderful photos.  I hope we can look at these and learn from them.  For that is the goal when we look at winning photos.