INTERESTING PHOTOS. YOU HAVE TO SEE THESE. 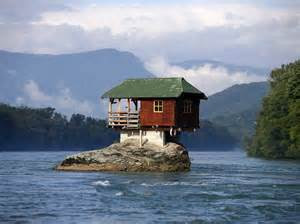 On a photo outing in Acadia National Park in Maine, Casey Coulter picked up a piece of broken mirror at the beach and started playing around with it, shooting it at different angles and just experimenting with his camera. What he came up with was a uniquely composed, eye-tricking image: 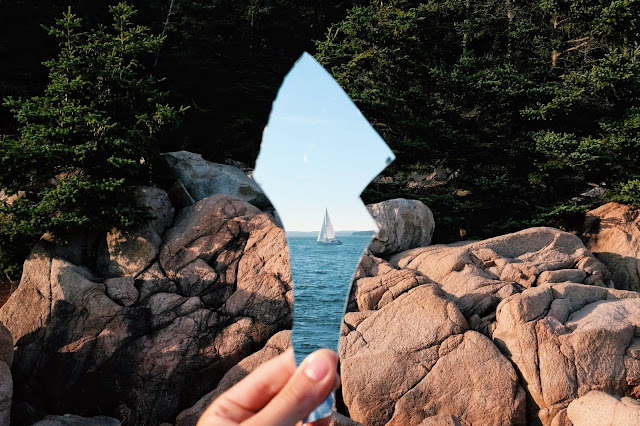 The Land and the Sea by Casey Coulter
The image was captured on a Fuji X100S at 23 mm, 1/640 and f/11 in order to get the rocks and the reflection in similar focus.

Breathtaking are the wonders of an Aurora. But imagine those ebbing polar greens and pinks from four-hundred kilometers in space. Astronaut Alexander Gerst captured this incredible moment while floating high above the continent of Australia inside the International Space Station: 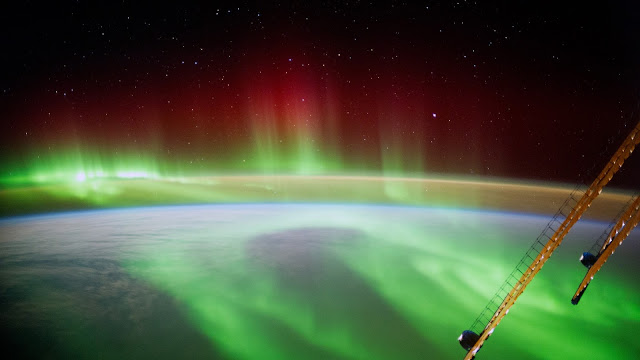 Gerst, a member of the International Space Station Expedition 40 crew, has just arrived to earth after five and a half months in space. When he wasn’t working for the Blue Dot Mission, Gerst was often found photographing our beautiful planet from afar.
This image is one of thousands captured by Gerst, at a rate of one per second at a resolution of 4256 x 2832 pixels. This selection of high resolution images was transformed into Ultra HD (4k) 3840 x 2160 pixel movie by the European Space Agency production team.

XXXXXXXXXXXXXXXXXXXXXXXXXX
Spinning a wheel decked in paint may sound like the favorite summer pasttime of a fifth grader, but for photographer Fabian Oefner, this is serious work: 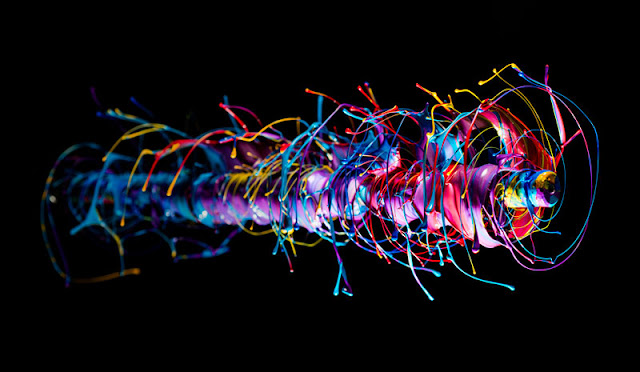 Spinning a stick covered in paint

Oefner is known for his bizarre photography ideas, most of which involve paint. As a part of his Black Hole project, Oefner connected a metallic rod to an electric drill and then covered it with paint. You can probably imagine what he did next.
Switching on the electric drill resulted in the paint flinging outward while making a spinning motion as it flew off the surface of the rod. Oefner captured this movement on camera using a sensor attached to the drill, which triggered specialized flashes at just the right moment. The result of this tweak allowed him to fire the flash at 1/40,000 of a second, enough to freeze the paint in mid-air. 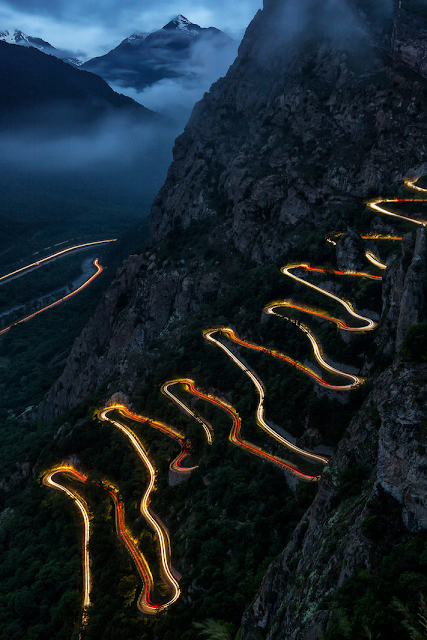 The Lacets de Montvernier (aka the shoelaces of Montvernier) is a 3.4 kilometer road in the Appalachian Mountains. It’s commonly used in the Tour de France. This Alpine climb offers 18 hairpin curves, with a 180 degree switchback about every 150 kilometers. The road was built over a period of six years (1928-1934), with the intention of reaching the small village at the top of Montvernier.

At 14,410 feet, Mount Rainier is Washington’s towering fourteener (14er), nestled between many other prominent peaks in Rainier National Park. Despite being one of the most dangerous volcanoes in the world and one of the most treacherous alpine climbs in the United States with its many crevasses and glaciers, Mount Rainier is a popular mountaineering challenge among North Americans; on average, it hosts 10,000 summit attempts per year, only half of which are successful due to harsh weather conditions and frequent avalanches. One climber captured this photo of his team descending the mountain along the Disappointment Cleaver route, warmed by one of Rainier’s famous sunrises: 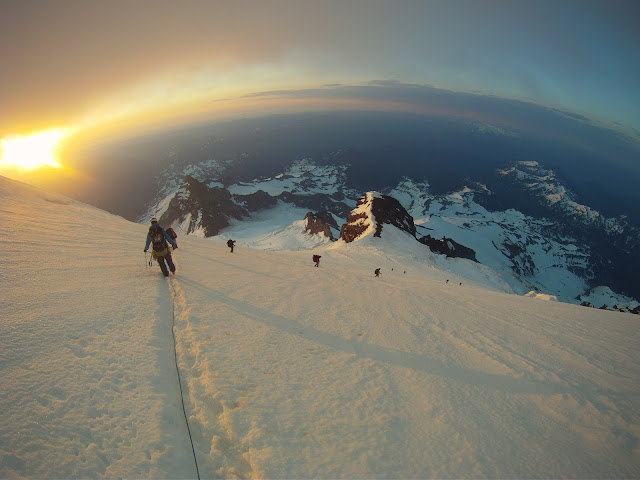 No, the curvature of the horizon in this photo is not natural. Rather, this effect was accomplished through the use of a fisheye lens, an extreme wide-angle lens that adds creative distortions to photographs. The fisheye lens was originally developed for meteorology and astrophotography, since it allowed meteorologists to capture the formation of clouds and astrophotographers to capture the spherical shape of planets in conjunction with the movement of stars.

While the fisheye lens has a controversial reputation among landscape photographers, take a look at the photograph without spherical distortion: 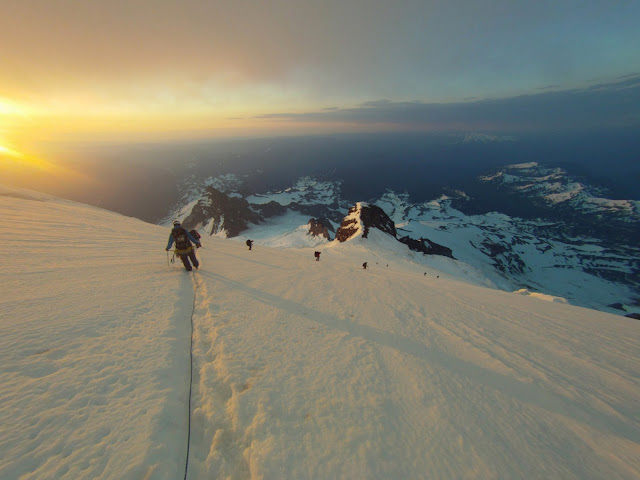 Without the fisheye effect, the shot is less impressive

Perhaps the fisheye lens does breach the bounds of reality, but spherical distortion clearly benefits the shot, infusing the photo with a certain vastness that shouts, “We really are on top of the world!”

These days it seems everyone is picking up a camera and enjoying the art of photography. Even our large furry friends on the west coast of Canada are testing the waters: 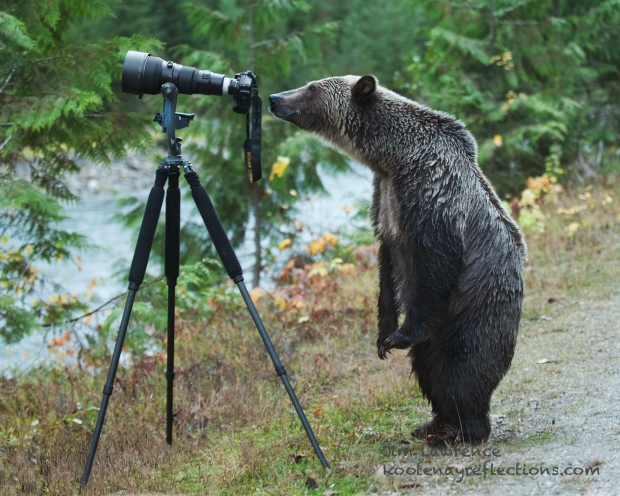 A curious bear gets behind the camera

Jim Lawrence, a B.C. photographer, captured this winning moment of a curious grizzly bear when out photographing the banks near Revelstoke.
Lawrence submitted his photo to CBC Listener’s Lens accompanied by a quaint audio recap of the event:

“The grizzly in the photo was fishing for Kokanee and making his way upstream. I set the camera up at an opening in the brush thinking I’d get a photo of him across the way. . . I should know better than to guess what a bear is going to do. He crossed to my side and scrambled up the bank, at which point I dashed back to the truck for another camera. . . They say intelligent species are curious and the big bear was no exception. He approached the camera cautiously, sniffing deeply, then stood up for a closer inspection. For the longest time, he studied the screen and buttons then, with a huge long-nailed paw, gently tugged on the strap . . . The weight of the long lens caused the camera to pivot quickly upward, startling the big fellow at which point he kind of shrugged, and went back fishing.”

Bear with us Mr. Grizzly, your big break is yet to come!

If you’re a nature photographer you no doubt love the idea of leaving behind your bed very early in the morning and catching the first light of day. Photographer Jens Kolk certainly does. He captured this wonderful image of a ladybug drenched in morning mist: 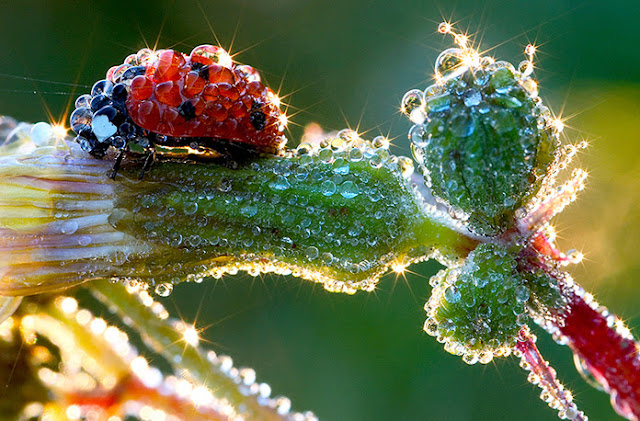 Ladybug in the morning dew

Some viewers have expressed their doubts about the authenticity of this image, assuming the overgenerous dew was produced by a spray bottle, and the unreal sparkles are a bit of retouching magic in Photoshop. Whatever might have gone behind the scenes, this is an image that you can’t look at without feeling a sense of morning freshness.

Imagine coming face to face with a crocodile in its natural habitat and then pulling out your camera to take its picture. That’s exactly what Mike Korostelev has set out to do in his career as an underwater photographer: 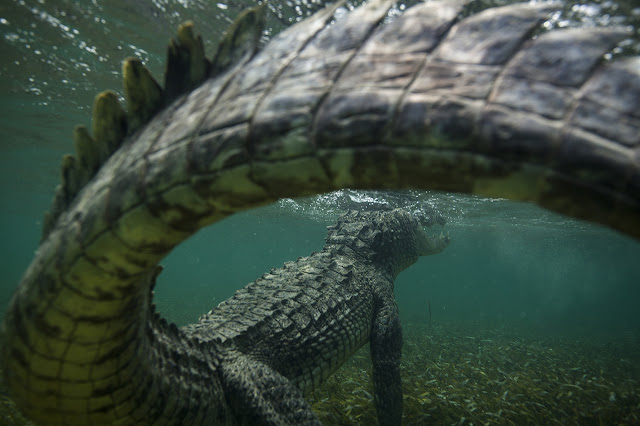 Originally from Moscow, Korostelev traveled to Banco Chinchorro, Mexico in order to fulfill his dream of photographing a crocodile in nature. He set up at a biosphere reserve and well-known breeding ground for crocodiles in the Caribbean Sea. When he took this photo, he described feeling as if there was only my underwater camera between the crocodile and him. Korostelev is also known for his breathtaking underwater shots of sharks, elephants, seals, and sea lions.

“We lived in a fisherman’s hut that stood right on the sea on stilts. During the day we searched for crocodiles, which swam out of mangroves to hunt fish. This one was quite friendly and showed its beauty all around.”

The breathtaking Icelandic landscape strikes again! On the eastern shore of the Vatnsnes peninsula lies Hvítserkur, a 15 meter high basalt stack formed by centuries of water and wind erosion. Photographer Brian Rueb visited the stack and captured this incredibly vibrant image of the iconic rock: 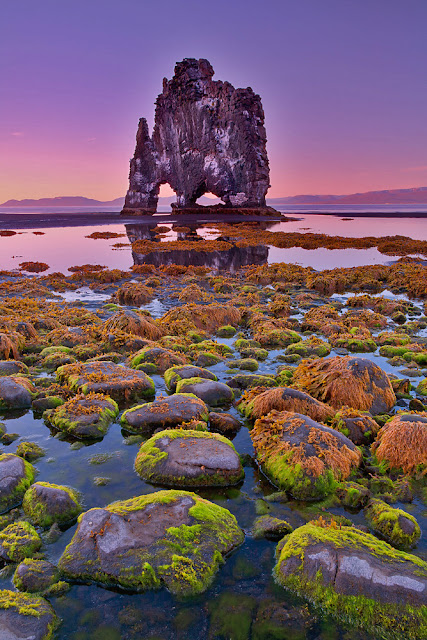 Rock of Ages” by Brian Rueb

Hvítserkur rests in Northwest Iceland and has become quite the popular subject for landscape photographers. The rock sits alone in a bay, set against mossy rocks and black sand. It is said to look like a dragon drinking, can you see it?

Hope you enjoyed these interesting photos captured by some great photographers.  Watch for this series on the weekend about once a month.