ISLAND IN THE SKY
Nature and landscape photographer Shane M. Kalyn celebrates the four natural elements—Air, Earth, Fire and Water—in his work, capturing images that are stunningly beautiful and serene. In this image, Kalyn brings together Earth and Water with a little ethereal mystic. Just how tiny is this island? 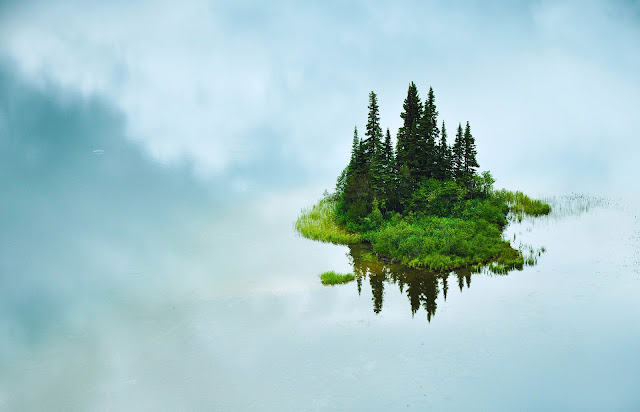 Island in the Sky by Shane M. Kalyn

This little island rests on Tumuch Lake in Prince George, British Columbia. The ripple on the left side of the photo comes from a fish and really gives the viewer a tiny perspective of the entire image.

BABY ELEPHANT GETS A BATH

You may think of nature photography as portraits that capture the raw, wild beauty of our an animal counterparts. But, on occasion, a photograph surfaces which captures the human interest side as well. Such is the case when Arkom Pimsarn pulled out his Nikon D700 to capture a candid moment between a young elephant and his caretaker. The photo, which you can see below, was taken in Chiagn Mai, Thailand, presumably at one of the regions more credible elephant sanctuaries. 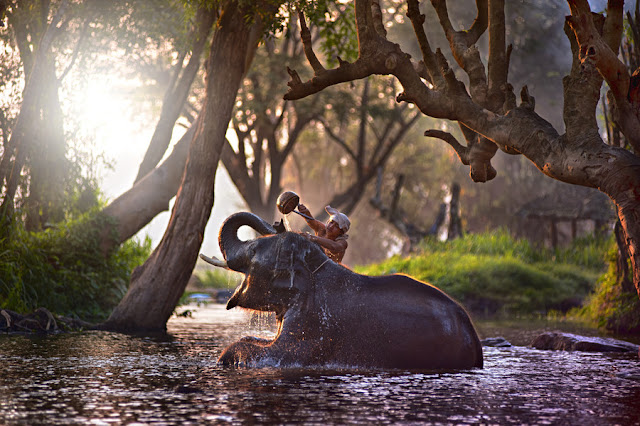 Wildlife and nature photographer Ivan Kislov has assembled quite an impressive portfolio over the past few years, including this gorgeous shot of a red fox that looks more like a painting than a photograph: 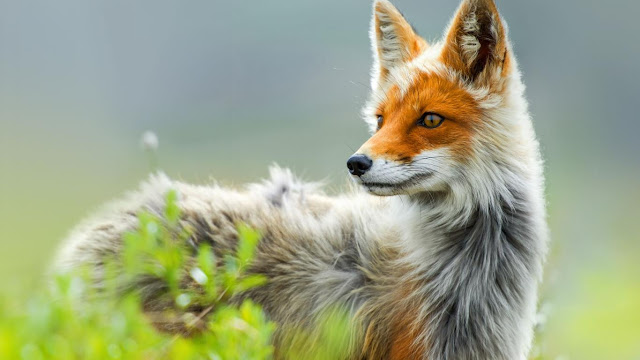 Kislov lives in Magadan, a port town in a remote area of Russia. He shoots with a Nikon D800.

The Kuang Si waterfalls, located in Laos, are a photographer’s dream come true. Against the tree filled backdrop, the multi-tiered pools of glassy, turquoise water flowing over into one another are the kind of photo ops most of us can only dream of stumbling across. The photo below, taken by a Thai photographer, Banky Yknab, is the perfect example: 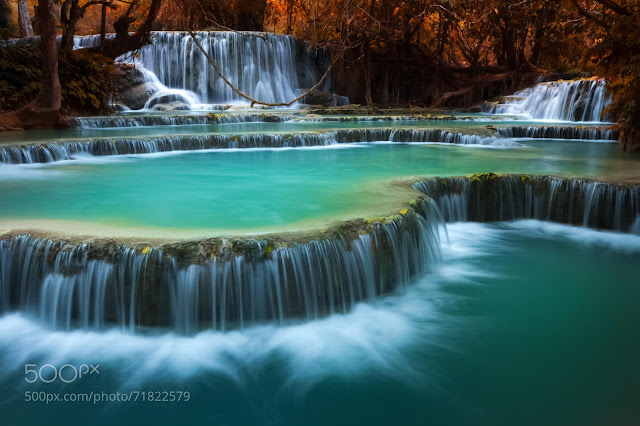 To get this wide angle, the photographer used a focal length of 20mm using his Canon 60D. A one second shutter speed was all he needed to get the subtle milky water effect using an aperture of f/32 and an ISO 100.

It could be a scene from a disaster movie, as a family on a motorcycle flees from the oncoming deluge. It’s a phenomenon known as a tidal bore, where a wave travels up a river or other narrow waterway and explodes over the banks. This occurs every autumn at the Qiantang River in Hanzhou, China: 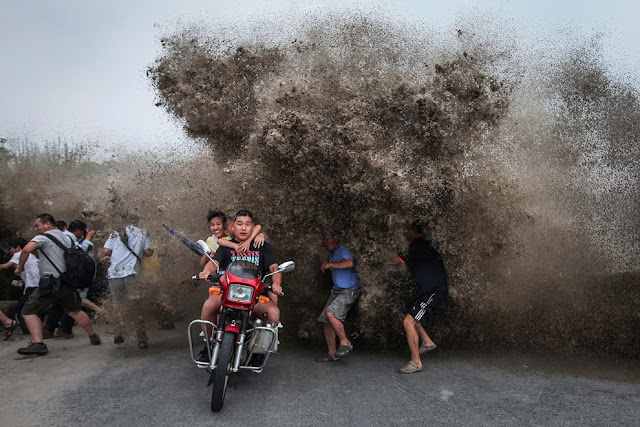 Tidal bores in this area can reach up to 30 feet in height and move as fast as 25 miles per hour. In the scene above, captured by photographer Xu Kangping, surprised onlookers rush to escape the downpour of muddy river water.

Some photographers sacrifice a lot for their craft. One of them is landscape photographer Steve Schwindt, who drove to Mount St. Helens and then slept in his car so he could wake up early enough to capture the sunrise. He credits these Indian Paintbrush flowers as his main motivation: 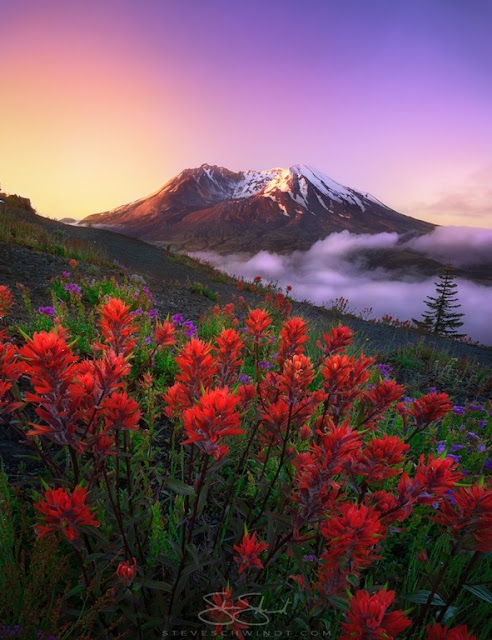 Stunning double rainbow over a field of flowers: 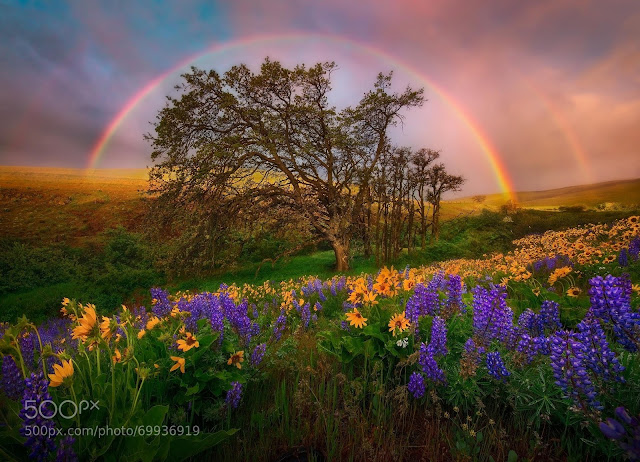 Adamus’s portfolio is full of striking, almost otherworldy landscapes like the one above—a perfectly framed combination of sunrise and double rainbow in the background, gnarled, lonely tree in the middle ground, and a splash of complementary-colored wildflowers in the foreground.
Adamus describes his own photographic style as:


“…one best defined by bold, dramatic imagery that stems from my love of unusual weather and getting far off the beaten path.”

As something of a nomad, Adamus travels the world in pursuit of more locations that are off the beaten path. This particular photo was taken in Columbia Hills, Washington. 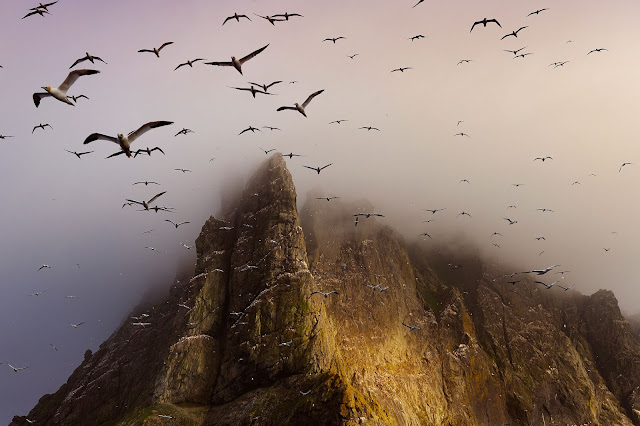 Gannets are large seabirds, typically found on the North Atlantic coasts of Europe and North America. Bass Rock off of Scotland’s east coast has the world’s largest Gannet colony, with more than 150,000 birds. It’s considered by naturalists to be one of the wildlife wonders of the world.
This photo was taken right as a bit of sunlight peaked through the clouds.

HOPE YOU ENJOYED THIS WEEKEND'S SPECIAL OF INTERESTING PHOTOS.  SOME OF THESE ARE REAL KEEPERS !!!

MAKE SURE YOU SHARE THIS WITH YOUR FRIENDS AND RELATIVES.  TOO GOOD TO JUST KEEP TO YOURSELF, RIGHT?