HERE IT IS, A PICTORIAL, AND INFORMATION OF THE GRAND CANYON: 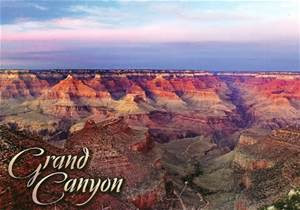 THE MOST INCREDIBLE SIGHT IN THE WORLD.  AND ONCE YOU VISIT THIS, YOU WILL NEVER FORGET IT.

My Friday special edition includes some great pictorials of some of the most beautiful places in the world, and this week is no exception.  There are some real gems in the world to see, and this is one of them.  Everyone should make it a goal to see this.  Photos just don't seem to do it justice, but we will try in this pictorial.

Allright, we have all been to see some deep canyons and was in awe with them.  When someone told me that the Grand Canyons were 1 mile deep (1.609 km) I was in shock.  So, let's start with some information from Wikipedia about this magnificent place.
The Grand Canyon (Hopi: Ongtupqa;[1] Yavapai: Wi:kaʼi:la, Navajo: Tsékooh Hatsoh, Spanish: Gran Cañón) is a steep-sided canyon carved by the Colorado River in the state of Arizona in the United States. It is contained within and managed by Grand Canyon National Park, the Kaibab National Forest, Grand Canyon-Parashant National Monument, the Hualapai Tribal Nation, the Havasupai people and the Navajo Nation. President Theodore Roosevelt was a major proponent of preservation of the Grand Canyon area, and visited it on numerous occasions to hunt and enjoy the scenery.
The Grand Canyon is 277 miles (446 km) long, up to 18 miles (29 km) wide and attains a depth of over a mile (6,093 feet or 1,857 meters).[2] Nearly two billion years of Earth's geological history have been exposed as the Colorado River and its tributaries cut their channels through layer after layer of rock while the Colorado Plateau was uplifted.[3] While some aspects about the history of incision of the canyon are debated by geologists,[4] several recent studies support the hypothesis that the Colorado River established its course through the area about 5 or 6 million years ago.[5][6][7] Since that time, the Colorado River has driven the down-cutting of the tributaries and retreat of the cliffs, simultaneously deepening and widening the canyon.
For thousands of years, the area has been continuously inhabited by Native Americans, who built settlements within the canyon and its many caves. The Pueblo people considered the Grand Canyon a holy site, and made pilgrimages to it.[8] The first European known to have viewed the Grand Canyon was García López de Cárdenas from Spain, who arrived in 1540.[9] 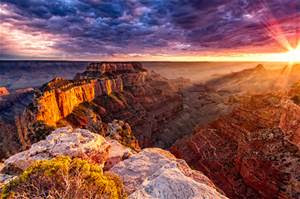 The federal government administrators who manage park resources face many challenges. These include issues related to the recent reintroduction into the wild of the highly endangered California condor, air tour overflight noise levels, water rights disputes with various tribal reservations that border the park, and forest fire management. The Grand Canyon National Park superintendent is Steve Martin, appointed on February 5, 2007 to replace retiring superintendent Joe Alston. Martin was previously the National Park Service Deputy Director and superintendent of several other national parks, including Denali and Grand Teton.[29] Federal officials started a flood in the Grand Canyon in hopes of restoring its ecosystem on March 5, 2008. The canyon's ecosystem was permanently changed after the construction of the Glen Canyon Dam in 1963.[30] 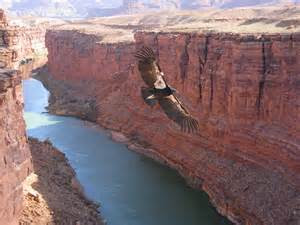 The California condor (Gymnogyps californianus) is a New World vulture, the largest North American land bird. This condor became extinct in the wild in 1987 (all remaining wild individuals were captured), but the species has been reintroduced to northern Arizona and southern Utah (including the Grand Canyon area and Zion National Park), the coastal mountains of central and southern California, and northern Baja California. Although other fossil members are known, it is the only surviving member of the genus Gymnogyps. The species is listed as critically endangered by the IUCN.
The plumage is black with patches of white on the underside of the wings; the head is largely bald, with skin color ranging from gray on young birds to yellow and bright orange on breeding adults. Its huge 3.0 m (9.8 ft) wingspan is the widest of any North American bird, and its weight of up to 12 kg (26 lb) nearly equals that of the trumpeter swan, the heaviest among native North American bird species. The condor is a scavenger and eats large amounts of carrion. It is one of the world's longest-living birds, with a lifespan of up to 60 years.[2]
Condor numbers dramatically declined in the 20th century due to poaching, lead poisoning, and habitat destruction.[3] A conservation plan was put in place by the United States government that led to the capture of all the remaining wild condors which was completed in 1987, with a total population of 27 individuals.[4] These surviving birds were bred at the San Diego Zoo Safari Park and the Los Angeles Zoo. Numbers rose through captive breeding and, beginning in 1991, condors were reintroduced into the wild. The California condor is one of the world's rarest bird species: as of October 2014 there are 425 condors living wild or in captivity.[5] The condor is a significant bird to many Californian Native American groups and plays an important role in several of their traditional myths. 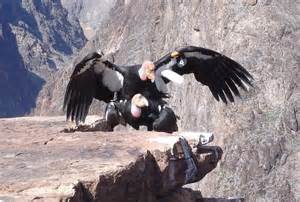 View of Deva, Brahma, and Zoroaster Temples as seen from Grand Canyon Lodge
One of the most beautiful ways to see the Grand Canyon is to get right down on the river into the canyon itself.  Here are a few of the great pictures, while running the river at the bottom of the canyon: 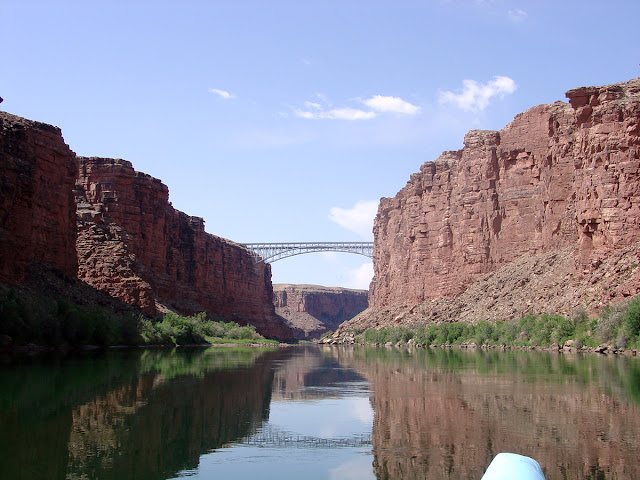 Mile 3: Approaching Navajo Bridge over Marble Canyon and the Colorado River. Sandstone and limestone of the Kaibab Formation make up the upper portion of the cliffs at Navajo Bridge. The lower part near and below the break in slope is Toroweap Formation. 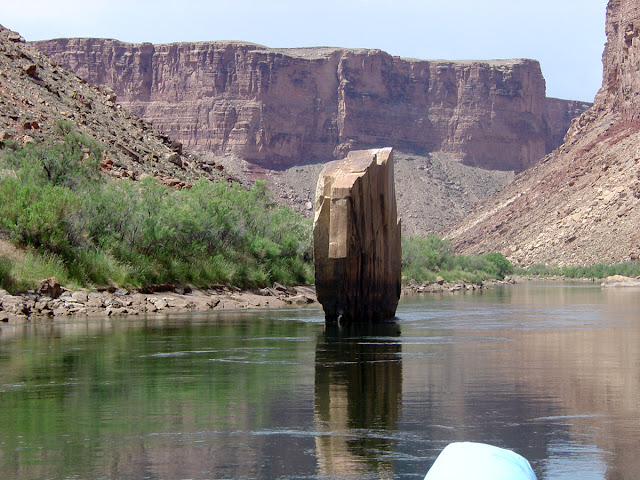 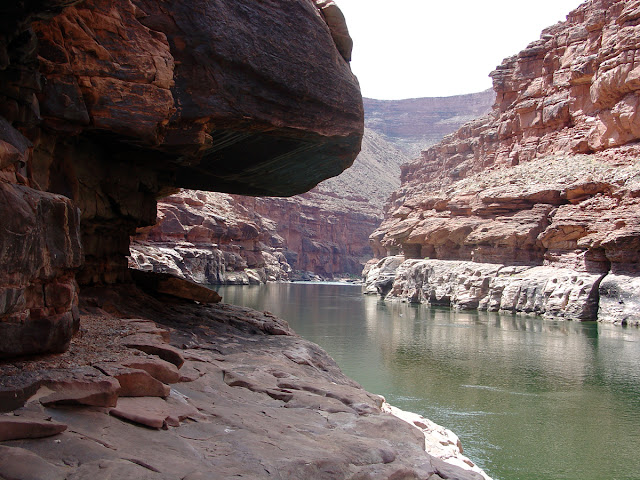 Mile 14: View looking down Marble Canyon above Sheer Wall Rapid from ledges of the Esplanade Sandstone in the Supai Group. 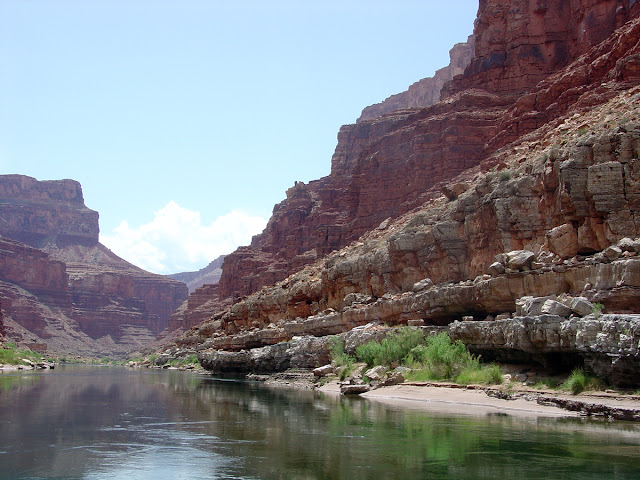 Mile 23: View looking downstream near where top of the Redwall Limestone first appears in Marble Canyon. 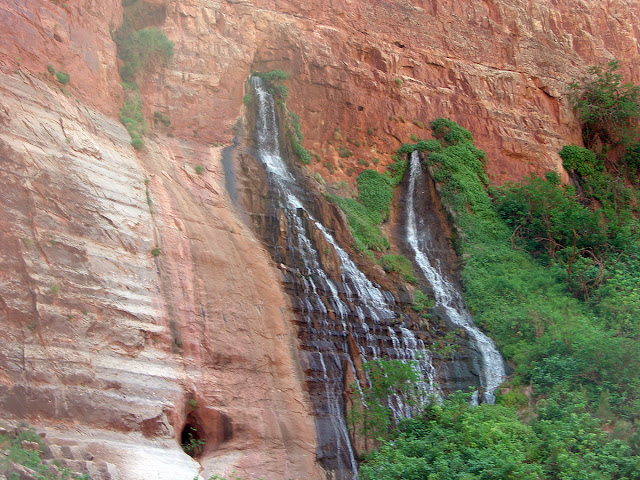 Mile 31.8: Springs issue from a cliff of Redwall Limestone at Vasey's Paradise in Marble Canyon. 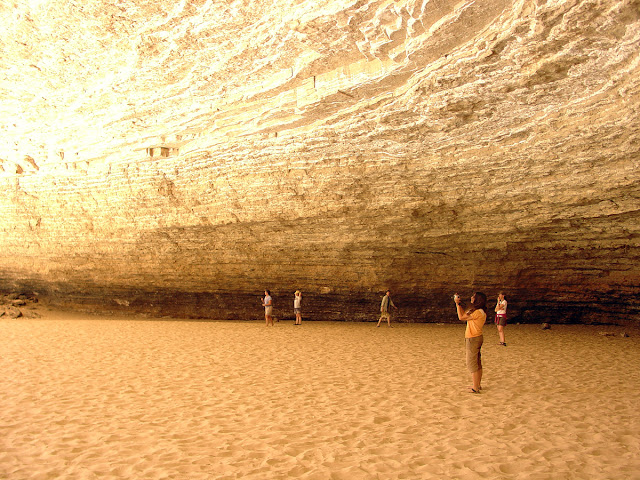 Mile 33: Redwall Cavern, a large natural alcove in the Redwall Limestone on the south side of the Colorado River. 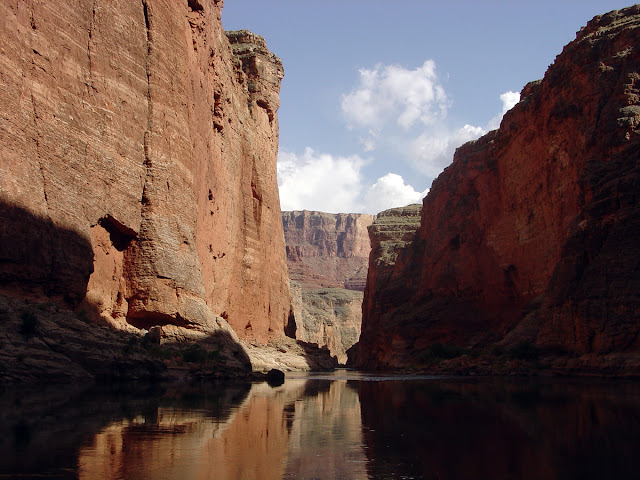 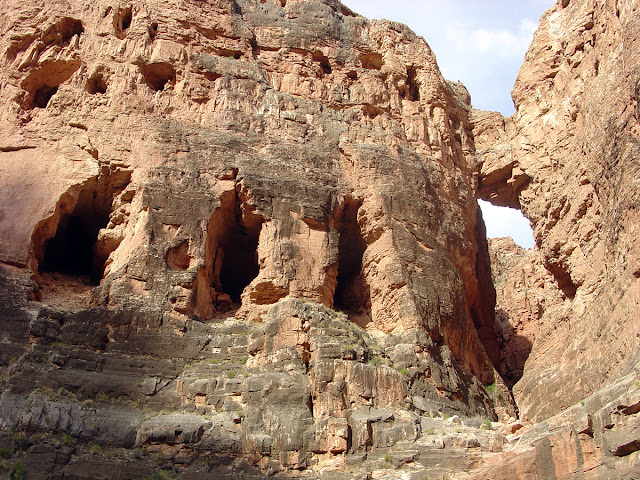 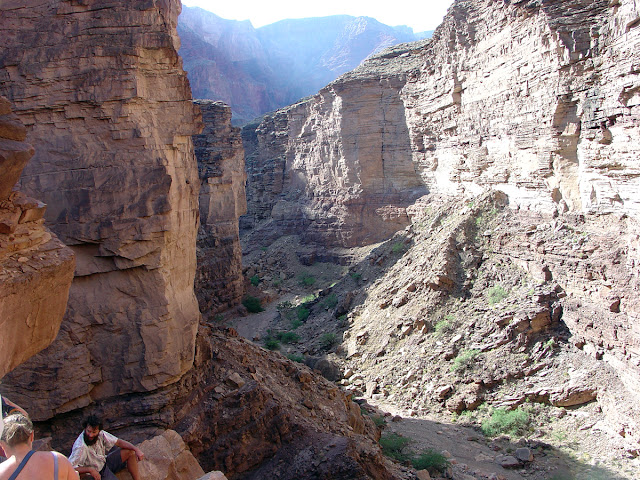 Mile 64.5: View along Lower Carbon Canyon. Rock in the lower part of the canyon consists of the Dox Formation, the youngest formation of the Middle Proterozoic Unkar Group. The Cambrian Tapeats Sandstone overlies the Dox Formation along the Great Unconformity (Potochnik and Reynolds, 1990). 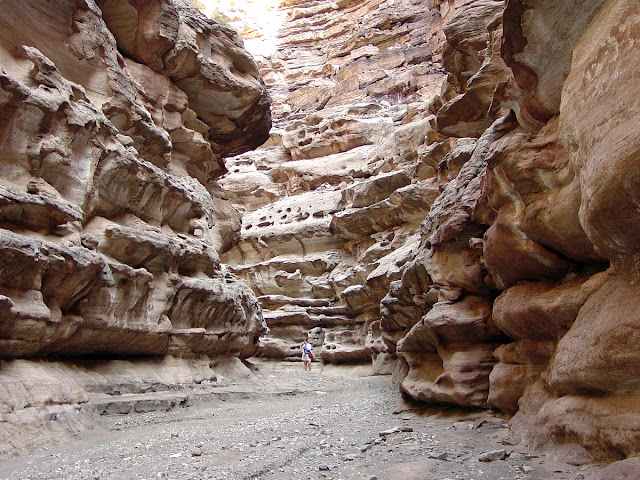 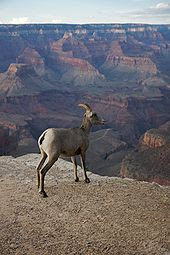 Grand Canyon National Park is one of the world's premier natural attractions, attracting about five million visitors per year. Overall, 83% were from the United States: California (12.2%), Arizona (8.9%), Texas (4.8%), Florida (3.4%) and New York (3.2%) represented the top domestic visitors. Seventeen percent of visitors were from outside the United States; the most prominently represented nations were the United Kingdom (3.8%), Canada (3.5%), Japan (2.1%), Germany (1.9%) and The Netherlands (1.2%).[61] The South Rim is open all year round weather permitting. The North Rim is generally open mid-May to mid-October.[62 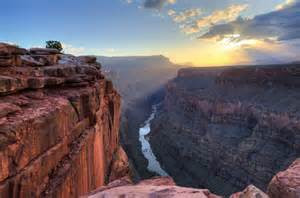 Temperatures vary wildly throughout the year, with summer highs within the Inner Gorge commonly exceeding 100 °F (37.8 °C) and winter minimum temperatures sometimes falling below zero degrees Fahrenheit (−17.8 °C) along the canyon's rims.[35] Visitors are often surprised by these potentially extreme conditions, and this, along with the high altitude of the canyon's rims, can lead to unpleasant side effects such as dehydration, sunburn, and hypothermia.
Weather conditions can greatly affect hiking and canyon exploration, and visitors should obtain accurate forecasts because of hazards posed by exposure to extreme temperatures, winter storms and late summer monsoons. While the park service posts weather information at gates and visitor centers, this is a rough approximation only, and should not be relied upon for trip planning. For accurate weather in the Canyon, hikers should consult the National Weather Service's NOAA weather radio or the official National Weather Service website.[36]
The National Weather Service has had a cooperative station on the South Rim since 1903. The record high temperature on the South Rim was 105 °F (41 °C) on June 26, 1974, and the record low temperature was −20 °F (−29 °C) on January 1, 1919, February 1, 1985, and December 23, 1990.[37][38][39] 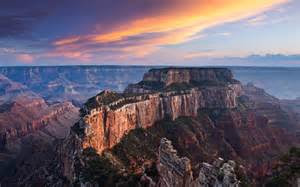 I hope you have enjoyed this photographic and informational journey into the Grand Canyon.  This is an amazing place, that deserves to be on your "bucket List" of places to visit.

Until next Friday, when I do another photographic expedition.