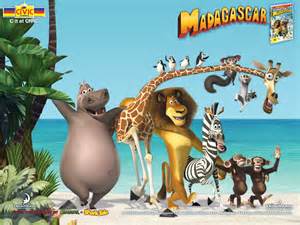 An island of
Mystery:

Alright, when most of think of Madagascar, we may think of the highly successful movie:  Madagascar, featuring a famous hippo, giraffe, a lion, a zebra, some chimpanzees, and other animals.  But, in reality, those animals do not exist in the real Madagascar.  Madagascar is an island off of the southern tip of Africa, but, it is very different from Africa.  And that is what I am hoping to accomplish in this special edition gallery, and commentary on today.  A very unknown country, and island, but so unique for the photographer.  I think that these rather large islands like Madagascar and Australia, are home to some of the strangest animals and plant life in the world.  Absolutely amazing sites of these things and you would be amazed that many of these plants and animals only grow on this island.  So, let's first take a look and an update from Wikipedia about Madagascar:

Madagascar (/ˌmædəˈɡæskər/ ; Malagasy: Madagasikara), officially the Republic of Madagascar (Malagasy: Repoblikan'i Madagasikara [republiˈkʲan madaɡasˈkʲarə̥]; French: République de Madagascar), and previously known as the Malagasy Republic, is an island country in the Indian Ocean, off the coast of Southeast Africa. The nation comprises the island of Madagascar (the fourth-largest island in the world), as well as numerous smaller peripheral islands. Following the prehistoric breakup of the supercontinent Gondwana, Madagascar split from the Indian peninsula around 88 million years ago, allowing native plants and animals to evolve in relative isolation. Consequently, Madagascar is a biodiversity hotspot; over 90% of its wildlife is found nowhere else on Earth. The island's diverse ecosystems and unique wildlife are threatened by the encroachment of the rapidly growing human population and other environmental threats.
The first archaeological evidence for human foraging on Madagascar dates to 2000 BC. Human settlement of Madagascar occurred between 350 BC and AD 550 by Austronesian peoples arriving on outrigger canoes from Borneo. These were joined around AD 1000 by Bantu migrants crossing the Mozambique Channel from East Africa. Other groups continued to settle on Madagascar over time, each one making lasting contributions to Malagasy cultural life. The Malagasy ethnic group is often divided into 18 or more sub-groups of which the largest are the Merina of the central highlands.
Until the late 18th century, the island of Madagascar was ruled by a fragmented assortment of shifting sociopolitical alliances. Beginning in the early 19th century, most of the island was united and ruled as the Kingdom of Madagascar by a series of Merina nobles. The monarchy collapsed in 1897 when the island was absorbed into the French colonial empire, from which the island gained independence in 1960. The autonomous state of Madagascar has since undergone four major constitutional periods, termed republics. Since 1992, the nation has officially been governed as a constitutional democracy from its capital at Antananarivo. However, in a popular uprising in 2009, president Marc Ravalomanana was made to resign and presidential power was transferred in March 2009 to Andry Rajoelina. Constitutional governance was restored in January 2014, when Hery Rajaonarimampianina was named president following a 2013 election deemed fair and transparent by the international community. Madagascar is a member of the United Nations, the Organisation internationale de la francophonie and the Southern African Development Community (SADC).
In 2012, the population of Madagascar was estimated at just over 22 million, 90% of whom live on less than $2 per day. Malagasy and French are both official languages of the state. The majority of the population adheres to traditional beliefs, Christianity, or an amalgamation of both. Ecotourism and agriculture, paired with greater investments in education, health, and private enterprise, are key elements of Madagascar's development strategy. Under Ravalomanana, these investments produced substantial economic growth, but the benefits were not evenly spread throughout the population, producing tensions over the increasing cost of living and declining living standards among the poor and some segments of the middle class. As of 2014[update], the economy has been weakened by the recently concluded political crisis, and quality of life remains low for the majority of the Malagasy population. 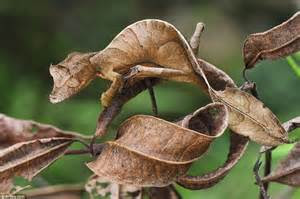 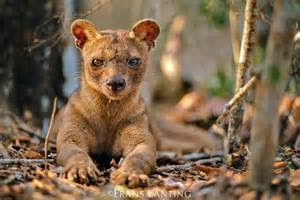 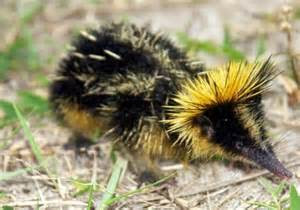 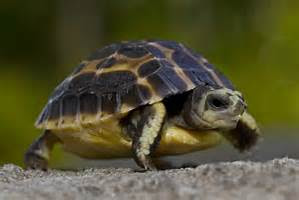 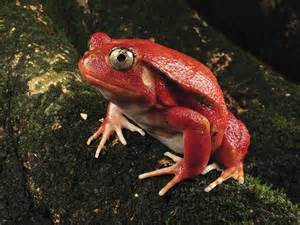 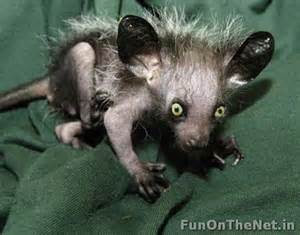 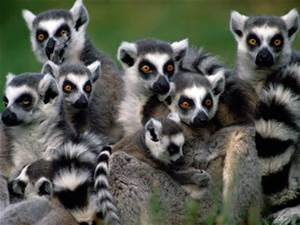 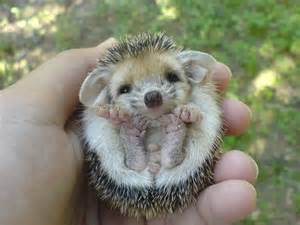 Now, the animals posted here, we have probably seen many of these
at the zoo.  Unique animals at the zoo.  But remember that these are unique to Madagascar.  That's what makes these animals so fun.

Ok, let's take a look, now, at the unique scenery and plants of
Madagascar: This map gives us some bearing of where we are at. 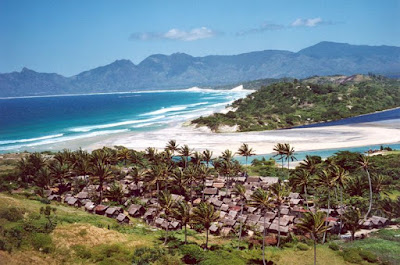 Fort Dauphin
Tôlanaro or Tolagnaro is a city on the southeast coast of Madagascar. It is the capital of the Anosy Region and of the Tôlanaro District. It has been a port of local importance since the early 1500s, and a new port, the Port d'Ehola, has been built by QMM and the World Bank. Formerly Fort Dauphin, it was the first French settlement in Madagascar. 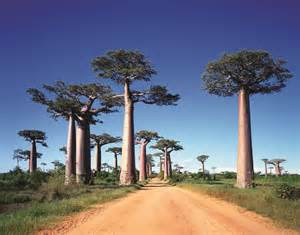 The famous Baobab trees of Madagascar.
Baobabs store water in the trunk (up to 100,000 litres or 26,000 US gallons) to endure the harsh drought conditions particular to each region.[10] All occur in seasonally arid areas, and are deciduous, shedding their leaves during the dry season 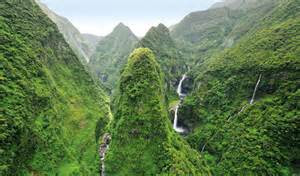 If you will notice on the map, there is an island as part of the Madagascar Islands.
The bigger island is called Reunion Island.  This is a picture from Reunion Island. 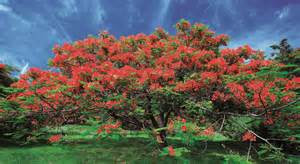 The Flamboyant Tree
Delonix regia is a species of flowering plant in the bean family Fabaceae, subfamily Caesalpinioideae. It is noted for its fern-like leaves and flamboyant display of flowers. In many tropical parts of the world it is grown as an ornamental tree and in English it is given the name Royal Poinciana or Flamboyant. It is also one of several trees known as Flame tree. 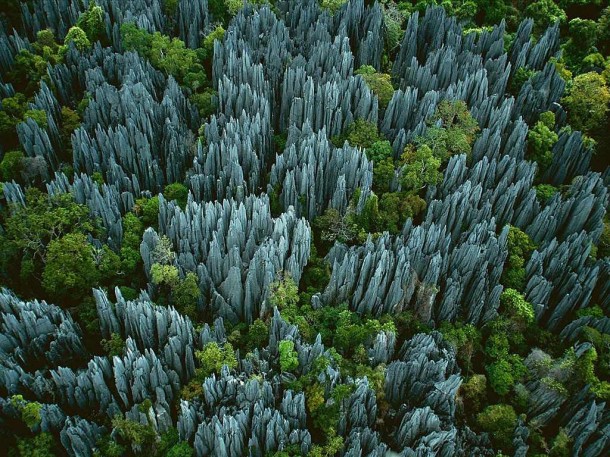 The "Stone Forest" of Madagascar.
. Tsinzhi stone pillars rise to a height of 70 meters of their vertices are not covered by any vegetation and sharp as a razor. 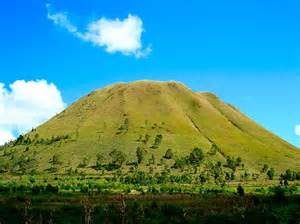 "Nosy Be" Volcano
Nosy Be [ˌnusʲ ˈbe] (also Nossi-bé and Nosse Be) is an island off the northwest coast of Madagascar. Nosy Be is Madagascar's largest and busiest tourist resort. It has an area of 320.02 square kilometres (123.56 sq mi) and its population was officially estimated at 73,010 in 2013.
Nosy Be means "big island" in the Malagasy language. The island was called Assada during the early colonial era of the seventeenth century. Nosy Be has been given several nicknames over the centuries, including "Nosy Manitra" (the scented island). 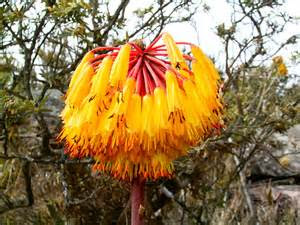 One of the native flowers of Madagascar 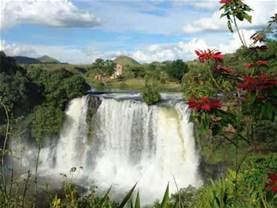 One of the beautiful waterfalls of Madagascar.

I hope you have enjoyed this brief overview of the Madagascar. I learned a lot of things about this country.  I thought it was only one island, but, of course, it is many.  Beautiful, unique, and a place that is so new in it's government that tourism is still rare.  I kept trying to collect my photos on the internet from a "tourism" site, but there isn't really anything set up on the internet.  So, an island
that is still so beautiful, but, yet so new. For photographers, I felt if you could find your way there, you would be in for a real treat because it has not been ravaged by the tourists yet.

So many fun places to go, and places to see.  Stay tuned each Friday for my special editions of "PEOPLE, PLACES, AND THINGS".