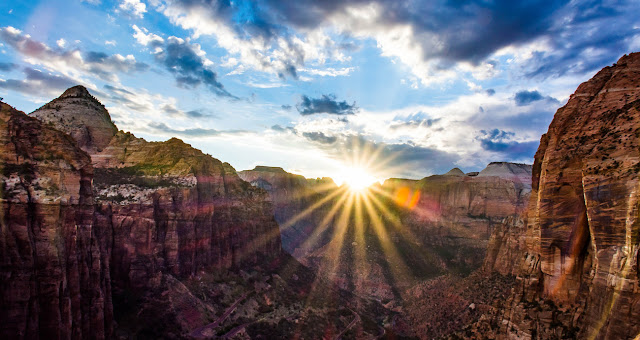 Zion Canyon is so unique in it's scenery.  How do you describe this to someone?  It has canyons like the Grand Canyon, and but big majestic mountains like Yosemite, all in one area.   There are trails throughout the park, and it is certainly filled with incredible scenery. 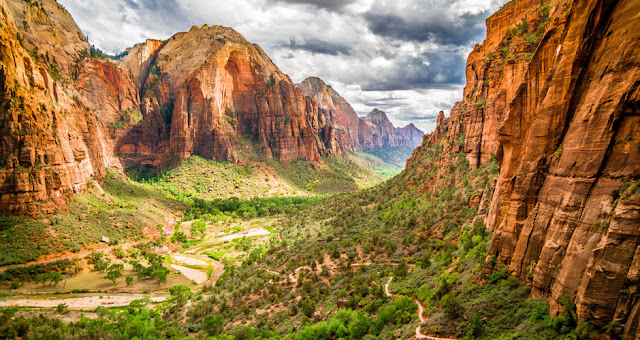 This area here is actually called Zion's Canyon.  People that come into this canyon
are usually struck with awe as they look on both sides of them and see the
grandeur of cliffs on both sides of them.  Colorful orange colored rock formations, that tower to
the heavens lined with beautiful green foliage.  To a lot of people in the early year, they
often felt like they were in "Zion", a place of solitude or a place heavenly.


So, here is a view of one of the canyons.  Some people when they see this think that this must be the Grand Canyon, but, no, that is hundreds of miles away.  Plus, this has green foliage in the bottom of this canyon.  So, it is much different.

Let's take a reading from Wikipedia about what they say about Zions National Park:

Zion National Park is located in the Southwestern United States, near Springdale, Utah. A prominent feature of the 229-square-mile (590 km2) park is Zion Canyon, which is 15 miles (24 km) long and up to half a mile (800 m) deep, cut through the reddish and tan-colored Navajo Sandstone by the North Fork of the Virgin River. The lowest elevation is 3,666 ft (1,117 m) at Coalpits Wash and the highest elevation is 8,726 ft (2,660 m) at Horse Ranch Mountain. Located at the junction of the Colorado Plateau, Great Basin, and Mojave Desert regions, the park's unique geography and variety of life zones allow for unusual plant and animal diversity. Numerous plant species as well as 289 species of birds, 75 mammals (including 19 species of bat), and 32 reptiles inhabit the park's four life zones: desert, riparian, woodland, and coniferous forest. Zion National Park includes mountains, canyons, buttes, mesas, monoliths, rivers, slot canyons, and natural arches.
Human habitation of the area started about 8,000 years ago with small family groups of Native Americans; the semi-nomadic Basketmaker Anasazi (300 CE) stem from one of these groups. In turn, the Virgin Anasazi culture (500 CE) developed as the Basketmakers settled in permanent communities.[4] A different group, the Parowan Fremont, lived in the area as well. Both groups moved away by 1300 and were replaced by the Parrusits and several other Southern Paiute subtribes. Mormons came into the area in 1858 and settled there in the early 1860s. In 1909 the President of the United States, William Howard Taft, named the area a National Monument to protect the canyon, under the name of Mukuntuweap National Monument. In 1918, however, the acting director of the newly created National Park Service changed the park's name to Zion, the name used by the Mormons. According to historian Hal Rothman: "The name change played to a prevalent bias of the time. Many believed that Spanish and Indian names would deter visitors who, if they could not pronounce the name of a place, might not bother to visit it. The new name, Zion, had greater appeal to an ethnocentric audience."[5] The United States Congress established the monument as a National Park on November 19, 1919. The Kolob section was proclaimed a separate Zion National Monument in 1937, but was incorporated into the park in 1956.
The geology of the Zion and Kolob canyons area includes nine formations that together represent 150 million years of mostly Mesozoic-aged sedimentation. At various periods in that time warm, shallow seas, streams, ponds and lakes, vast deserts, and dry near-shore environments covered the area. Uplift associated with the creation of the Colorado Plateaus lifted the region 10,000 feet (3,000 m) starting 13 million years ago.[6] 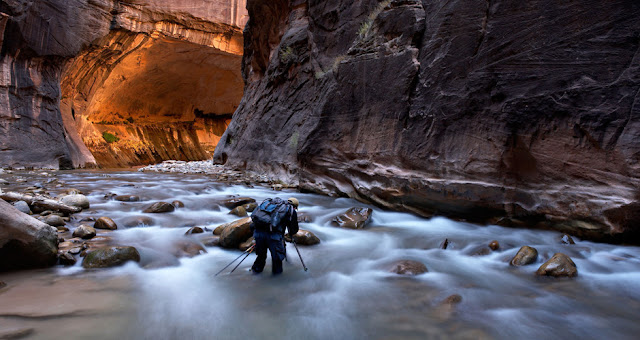 If you don't bring your camera to Zion National Park then you might just be the ultimate Luddite--but we're not judging. Zion is pretty dang photogenic, and you won't be able to resist snapping at least two dozen photos per minute. It's the whoa-factor everywhere you look. Plus: WILDLIFE.
(hashtag)zionphotolove 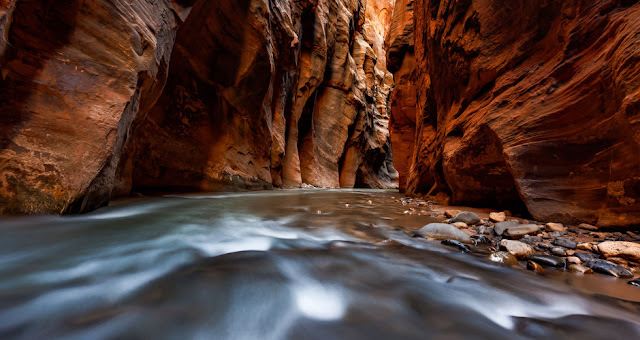 Another famous part of Zions Canyon:  " The Narrows".  Many people have lost their lives here because, as calm and serene as this seems, it may catch you by surprise if a nearby storm  sends
a rush of water down the canyon and you are not prepared for a wall of rushing water.  It is a
scary thought to find yourself trapped through this. 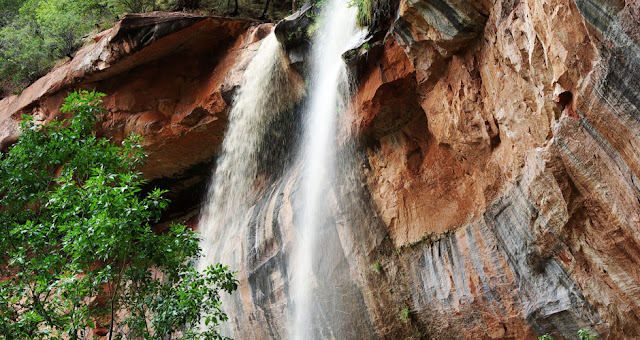 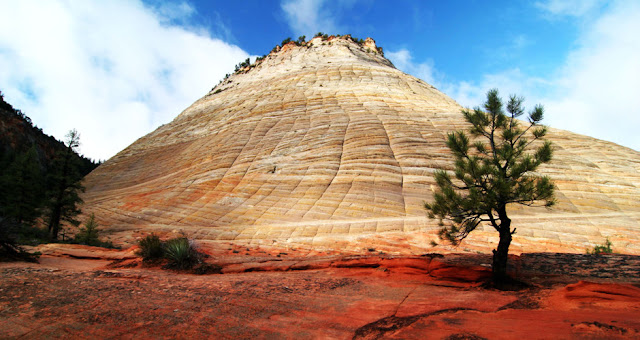 The rock formations in Southern  Utah and Arizona are the most unique of anywhere in the world.
But, looking at this mountain, don't you just wonder how this one was formed through time?  Maybe God was having fun playing in the creation of the world.
This is simply called:  "Checkerboard Mesa". 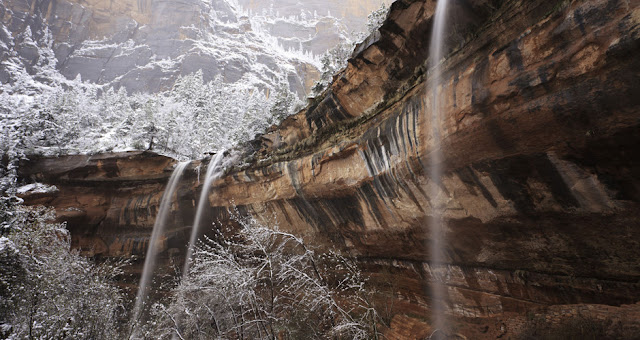 Not all National Parks are open in the winter.  Zions Canyon is one of the rare ones, because the
beauty of the canyon does not cease in winter.  This is "Lower Emerald Pools" in the winter, and
it simply breathtaking. 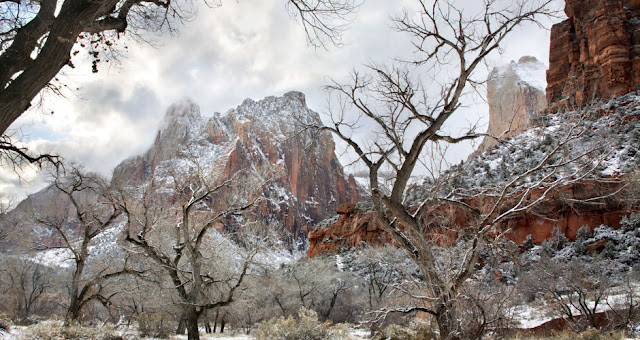 Another photo of "Zion Canyon"  in winter.  It just makes things take on a whole
new meaning to beauty in each of the seasons. 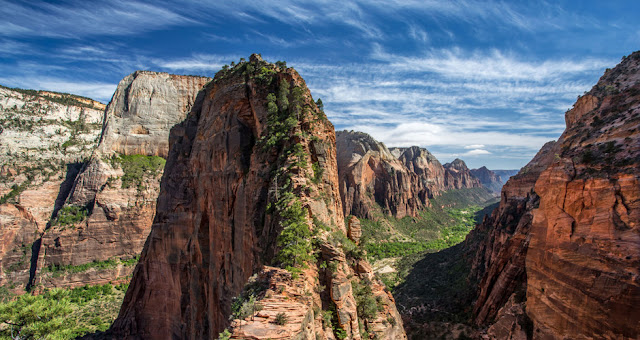 This massive mountain just comes out of nowhere.  Right in the middle of the canyon.
Appropriately named:  "Angels Landing". 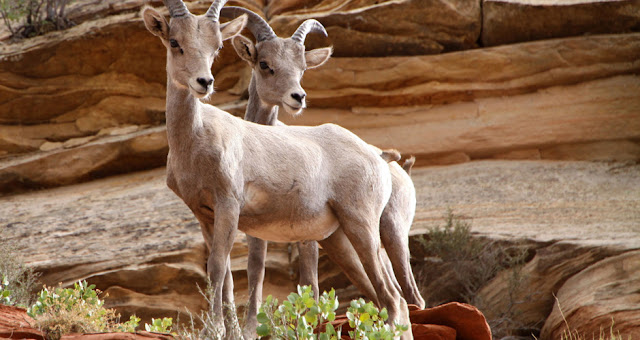 Similar to Yellowstone National Park, the wildlife is usually easy to spot.  Not quite so tame,
but they will pose for you.  Did you notice the one in the front smile for you?  JK.  But,
there is a lot of wonderful wildlife in this beautiful National Park. 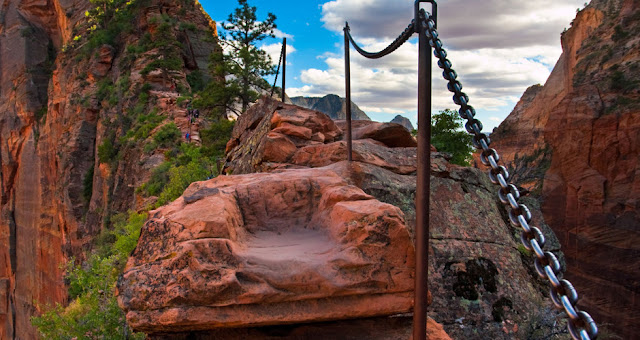 So, speaking of a beautiful photographic spot, can you believe they have constructed
a trail you can go up to the top of "Angels Landing"?  Breathtaking to say the least. 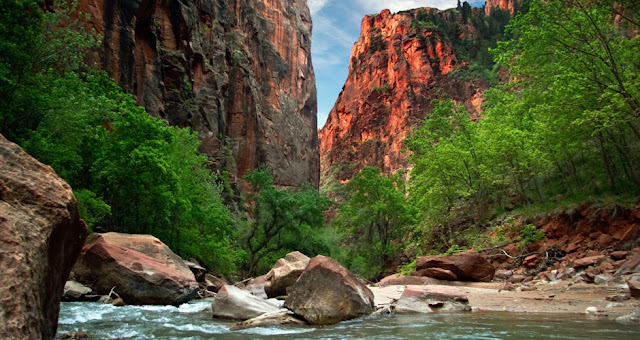 The Virgin River is the main river that cuts it's way through this main canyon.  It makes
the beauty of the canyon even more beautiful with it's slow and winding flow. 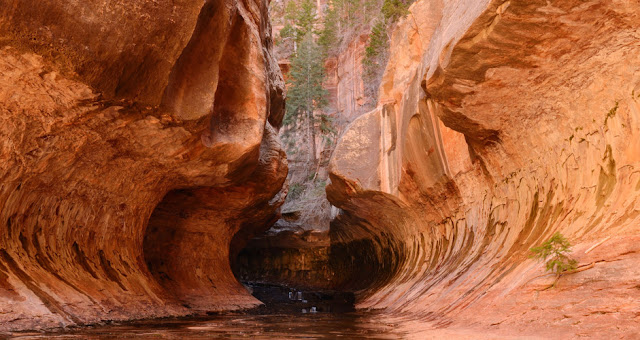 This particular part of the canyon is called:  "The Subway"  Would you like to take your boat
through this?  Hmmm, can be intimidating. 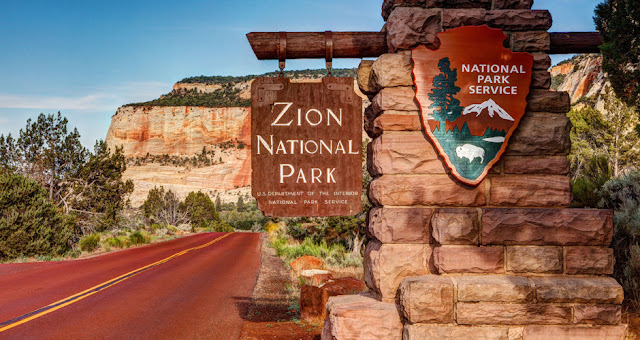 And this is the entrance and exit into the park.  Notice anything different here?  Down
here when all you have is red dirt to make the roads, the roads turn out to be red, also.
It just adds to the beauty of driving through here.  Really, no one adds color dyes to the
cement, it is just because there is so much red clay and red soil they use to make the road with.

Well, I hope you have enjoyed this photographic journey of Zions Canyon National Park.  One of the
most beautiful places in the world.  Millions of people come from all over the world to see this
every year.  It is one of the most visited National Parks in all of the United States.

All photos Compliments of the U.S. National Park Service