GREAT PHOTOS WITH YOUR CELL PHONE

Great photos with your cell phone!

I think in today's world, we all take pictures with our cell phones.  And, boy, have they come a long way.  At what point do you wish you could do more, or do you realize that the pictures you take are, say, ho-hum?  Well, before I get done here, I hope to clear up a few things about taking pictures with your cell phone, some do's and don'ts.
So, let's get started.  In the camera world, we are usually familiar with names like Nikon, Canon, Pentax, Fuji, Sony, Panaonic, Olympus to get us the serious photos.  In the cell phone world, we are used to names like Nokia, Samsung, LG, Apple,  Motorola, Sony, Ericson, and others.  Do these people know anything about taking pictures?   Well, they seem to be doing a pretty good job, as millions of people are relying on them every day.  We see the "selfie's"  taken all the time, you know, the shots of yourself with your friends or family, all close-up and smiling at the table or couch, or somewhere.  Memories of people.  Lots and lots of "selfie's".  Ahhh, now it was such a great picture, you want to blow it up, or enlarge it, and hang it on the wall.  Great!  You are in luck!!  You have one of those new cell phone cameras that have a 16 megapixel camera system in it.  I can blow it up beautifully!  My professional photographer friend has a 16 megapixel camera too, and he paid $2000 for it.  So, what is the difference?  A lot.  I don't really want to pop any body's bubble, but, I do want to expose you all to the truth.  A 16 megapixel camera in a phone, is not the same as a 16 megapixel camera in a DSLR or a $2000 camera.  See this excerpt from the professional:

Kalpesh Asalways, Entrepreneur, Philanthropist, Photographer, Engineering Professional, Hobbyis...
There is a huge difference.
As image quality mainly depends on the sensor size, now keeping in mind the larger sensor in DSLRs and the comparatively small sensor in Mobile, there is considerable loss of sharpness and clarity. Distortion is also a major problem to take in to account when comparing these two.

Next problem I see happen all the time:  Fuzzy pictures because we don't keep the cell phone clean, or the lens is always exposed to dirt, and fingerprints, etc.  When you grab your cell phone, what is there to keep you from accidentally grabbing your lens on your phone?  Nothing.  So, often the picture comes out just a little fuzzy, because you have a big fingerprint on your lens of your phone.  So, if you notice the problem, what do we do?  We clean it with our shirt tail.  Really?  Is that clean?  If we go to some class on photography in a camera class, they would die if they saw you clean your lens with your shirt tail.  Two problems:  number one:  you usually only get part of it clean, or just smear it around.  It looks good to you, so you take the picture, and it passes.  Don't enlarge it, because you will find it really wasn't clean.  And two:  there is microdust on that lens, so, when you clean it with your shirt tail, let's just scratch the lens a bit.  That's what happens too.  Oh, but the cell phone companies put a protective glass on their lenses to keep it from getting scratched, they say.  Glass is glass.  It may take some harder dust to scratch it, but, it still will scratch.  I think that is why you should trade your phone in every two years, because in two years, that lens is shot.   Hahaha.  If you can, get a real lens cleaning cloth to take with you, and clean the lens properly.  What a difference a clean lens can make.  There are lens cleaning tissues, and lens cleaning cloths.  Either will work, and either will make a big difference.
Then there is the surprise:  a broken lens.  My wife takes a lot of pictures with her camera.  But, I think she tries to take good care of it.  She has a special pocket in her purse to keep it in a clean spot, and to protect it.  But, somehow, she took it out one day and the lens was broke.  How did that happen?  Don't know.  Bumped it with something in the purse?  Bumped the purse into something?  Don't know.  Went to the Cell phone store to show the clerk there to see if there was something she could do.  And he said, I have the same problem, and the clerk had a broken lens too.  There are places that fix broken lenses in cameras.  Cost is around $50 to $80 depending on the repair shop.  So, these camera lenses are fragile.  Do what you can to take care of them.
Now, to go into taking good pictures with your cell phone:
I admit that I take pictures with my cell phone because they are convenient.  I also admit that I still use the rules of photography to make the pictures look as good as they can. The first question: should this photo be vertical or horizontal? 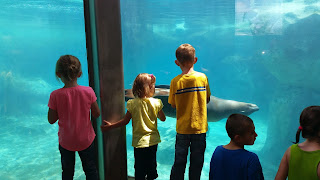 My response is:  Fill the frame.  Get the frame full.  Obviously when you have one person in the picture, it can be totally different, but, fill the frame: 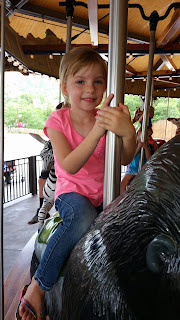 If you take a picture of just one person, I think that the vertical picture is usually the best.  If you think it won't fit your photo album, then change your photo album, because the picture looks better than your album. 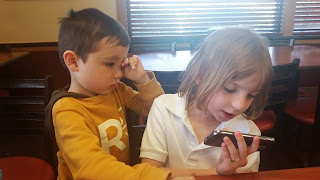 There is one other thing I want to mention.  If you have one of those smart phones that have a built in flash, be aware that there is not two lights in your phone:  one for flashlight and one for flash.  It is the same light.  A flashlight is usually not the best light for taking pictures.  So, try using natural light if you can: 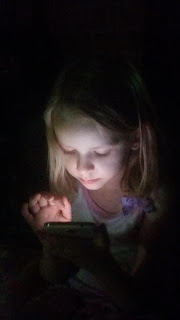 This is just a photo of my little granddaughter playing with my cell phone in the dark.  The light is coming only from the cell phone.   Amazing what natural light can do.


There are other things to help you to improve your cell phone pictures.  I know many people have gone to other apps to "doctor up" their photos or to add a little pizzaz to their photos.  I think they are a lot of fun.  There are several apps out there that allow you to have some fun with your photos.  Some have tried Instagram, and some PicsArt, and there are others.  I would actually say to try them all till you find the one you are comfortable with. I have no objections to using them, as long as you don't go too crazy with them.  When I look at photos submitted on Pinterest, I often look for photos that have NOT been doctored up.  What photos are even real anymore?  Sometimes scenery pictures look like they are from some other planet, I swear.  So, I like to keep them still looking natural, but, in some cases, you can have fun. 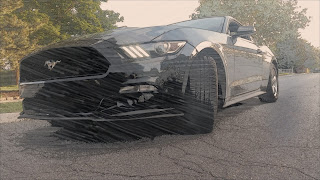 This is a photo that had some special effects added to this 2015 Mustang, to just kind of give it a dream effect.  Lots of fun things you can do.  As far as special effects, I really don't know if I would try it that much on people.  I have seen some other photographer use it on scenery, just to enhance the colors, but, not really change the colors, and those are spectacular.

Next Monday, I will start talking a bit more on RULES OF COMPOSITION and how that can help you in your everyday photos.  And that can apply to taking pictures with your cell phone as well as the professional photographer.  If you understand these rules of composition, you will make everything look better.  I know that rules are made to be broken, but, in photography, they don't get you very far.

* Note:  all photos used in this week's blog, were shot with a cell phone. 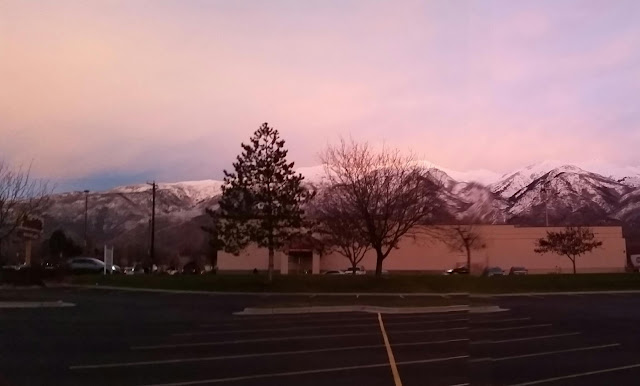