THIS WEEK'S PHOTOS OF THE WEEK, ARE TRUE WINNERS, AS THEY ARE POSTED WINNERS FROM THE NATURE CONSERVANCY  PHOTO CONTEST.  THESE ARE SOME OF THE MOST AMAZING PHOTOS OF NATURE YOU WILL EVER FIND.  AND OF COURSE, BECAUSE THEY ARE WINNING PHOTOS, WE WILL POST THEM HERE TO BE SHARED WITH YOU AS WELL.  ENJOY THESE AMAZING PHOTOS: 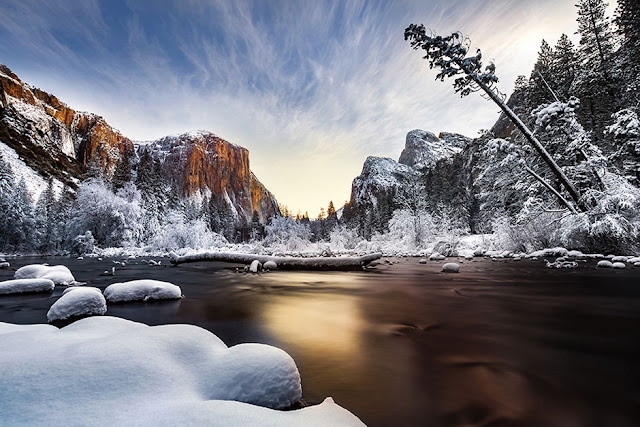 "I was having a tough time this past Xmas as my daughter and son-in-law had recently been recommishioned to Japan. Alone at the holidays, I headed to Yosemite on a last minute whim. With no available accommodations, I decided a tent would be ok, and got everything set-up in camp just as a strong storm rolled in. Over a foot of fresh snow fell that cold Xmas eve. I woke before dawn, still fully dressed and very cold. It was still dark out, but I could see the stars and the gleam of new snow. I headed a short distance down the road and pulled off at the bend in the Merced. Setting-up my tripod just as the first signs of light began to fill the valley, this was my Christmas morning scene. For me, this is more than just a captured moment, it is the moment my heart felt healed and full." 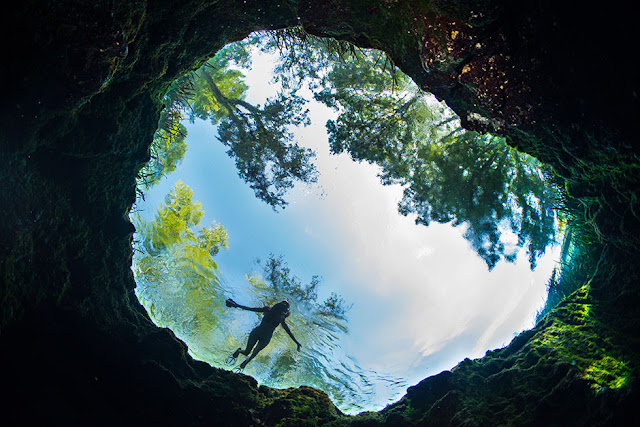 Dancing at the Edge - In north Florida © Jennifer Adler
"Nature means freedom; it gives us the ability to fly. The air-clear water emanating from the region's freshwater springs is a welcome break from the oppressive summer heat, as well as an invitation to soar in the treetops. Late one Sunday afternoon on my friend’s birthday, we drove out to Ichetucknee Springs State Park (Fort White, FL, USA) for a celebratory swim. We arrived at the end of the day when most people were just leaving the park and ended up being the only 2 people in Blue Hole, a 40-foot deep spring a quarter mile walk into the woods. The 70-degree water felt icy cold as compared to the 100+ degree heat, but it was incredibly refreshing. Leaving the above-water world behind, I dove deep into the spring, looking up to see this view that truly encapsulates my feelings when underwater."
Camera details:  Nikon D800, f/8, 1/160 sec, ISO 1000 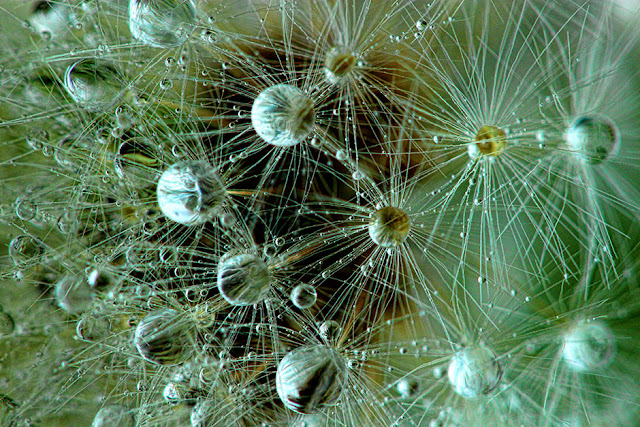 "This is a dandelion at seed stage with water droplets all over it. I photographed it one evening as it was a very light misting rain--no sun at all. I laid flat on the ground on my right side--the green in the photo is from back ground foliage as I photographed this dandelion in one of my perennial gardens. I normally photograph the insects in my gardens but in the Indiana Spring season not much is out yet---so I was a bit bored and looking for something to photograph when I thought about the dandelions. I was amazed at how the droplets just clung to the dandelion---who would have thought!" 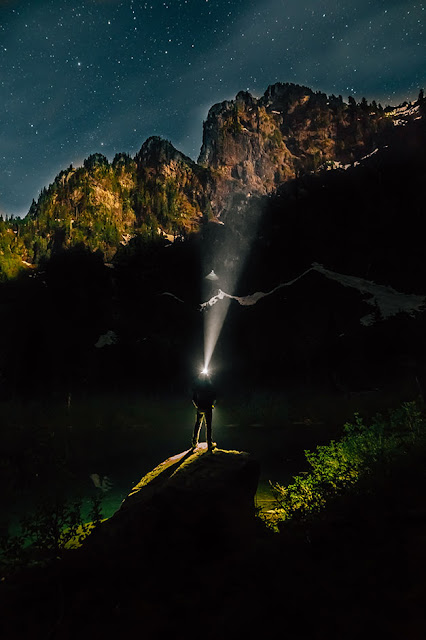 "I decided to do a sunset hike up to Heather Lake near Mt. Pilchuck and stay the night. It was a beautiful 75 degree evening, which is rare for the month of May in Washington. When I reached the lake after sunset, I found the perfect spot on the water to set up camp and take in the starry night sky. Nearby was a large boulder in the shallows I was able to climb onto by following stepping stones from the shore. After setting my shutter on a timer, I hopped across the stones, scrambled up the rock, turned on my head lamp, looked up at the stars, and let my camera do the rest of the work." 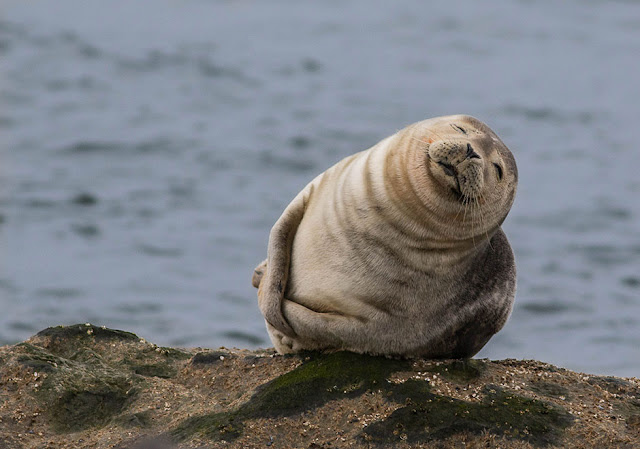 "This image was captured at the Barnegat Lighthouse jetty in New Jersey. Though I had seen several harbor seals swimming around earlier in the day, I was ecstatic to see this chubby little guy sitting on the rocks! I sat on a rock far enough away to not bother him, but close enough to where he was interested in what I was doing. I sat with him for at least 30 minutes taking photo after photo, really enjoying my time with him! Even though he looks like he is holding his belly and laughing at something funny I just told him, he was actually just doing a big stretch. I eventually left him to finish sunning himself on the rocks and enjoy the rest of his day!" 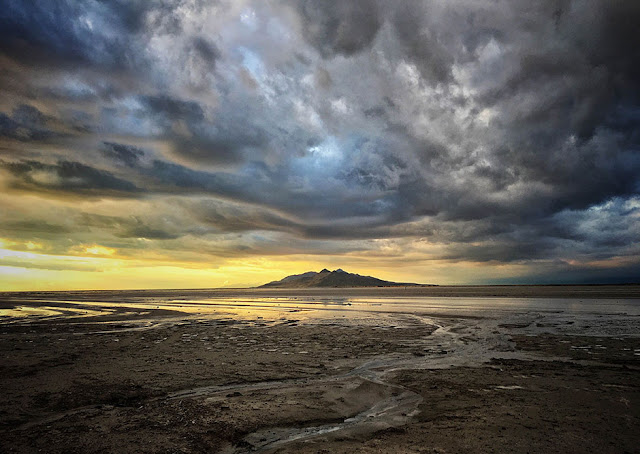 "On Mother's Day weekend a large storm rolled into Salt Lake City. All I wanted to do was to get out and find the sun. I drove west towards the Salt Flats near Wendover. I spent the day discovering the diverse landscape. Salt. Water. Clouds. Mountains. I returned to Salt Lake City during the golden hour and made a stop at the Great Salt Lake near Saltair. An amazing show of light and shadow was taking place. I took over 200 shots in that twilight hour. I settled on 'Storm at the Great Salt Lake' for its lines, light and textures along with the central focus of Antelope Island in the distance. I love John Muir and thought of this quote: 'In every walk with Nature one receives far more than he seeks.'" 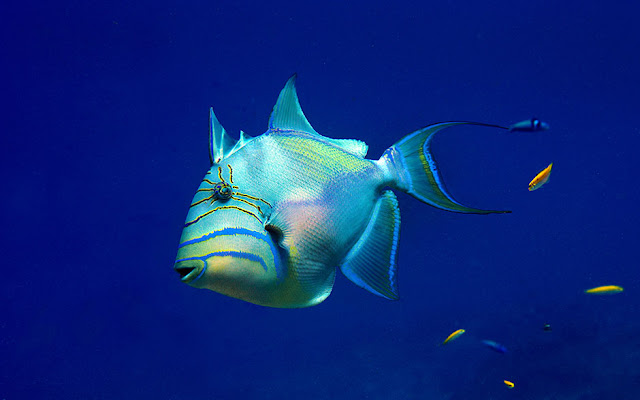 "The trigger fish family all are able to lock the enlarged first dorsal fin spine by pressing the second spine int a groove on the first spine to erect it, and that is seen here. I spotted this young Queen Trigger fish, Balistes vetula, in the water column several meters above the bottom where it was calmly being cleaned by a posse of yellow wrasses. The location was about five meters deep at Roberta's Reef (a spot I know well having dove there from shore many times during a long stay on the island) off the coast of Cozumel, Quintana Roo, Mexico. The late afternoon sun gave a perfect light for an ambient light only image. It's an honor to have my image selected by the Nature Conservancy, an organization that for 50 years has worked hard to protect the environment of the state I love and call home, Colorado. I especially feel gratitude for the extensive work the conservancy does in protecting the oceans by using committed scientists and policy experts and wisely involving stakeholders at all levels." 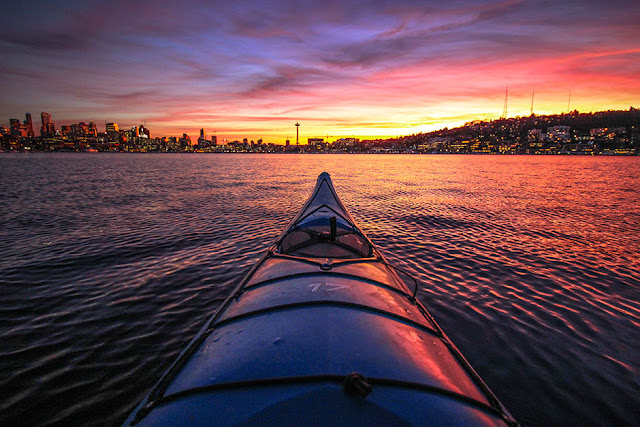 "Living on a houseboat in Seattle has its advantages! As the sun dipped beneath Queen Anne Hill and the cirrus clouds lit up with the sunset, I hopped in my kayak and paddled to the center of the lake to soak it in. With a slight breeze sweeping north to south, the lake transformed itself to reflect a pattern reminiscent of wind swept dunes across its surface level.I soaked up the remaining minutes of these beautiful colors until I began paddling back home in what would become a night-veiled sky." 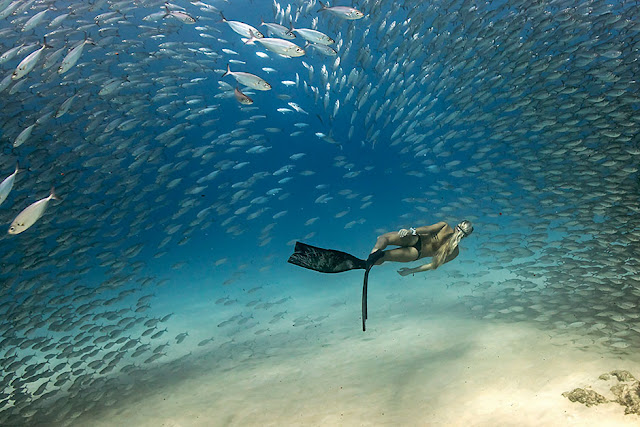 "There is a large resident school of Akule (Bigeye Scad) that live in Kailua Bay on the Big Island and quite often we free-dive it for photo-ops. I went out this day in May 2016 with a local snorkel guide. The sandy bottom here is about 35 feet and model and photographer are free-diving." 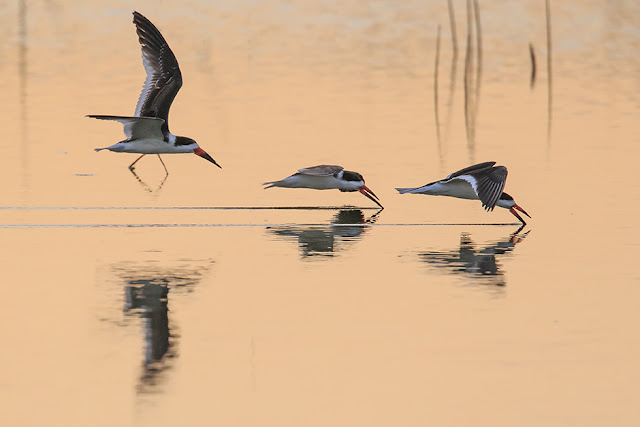 "Taken at the Viera Wetland in Viera, Florida near sunset. Viera Wetlands is a water reclamation site in Brevard County well-known for attracting birds and other wildlife. A small flock of Black Skimmers were feeding in one the the major pools during the still of the evening."


A SINCERE THANKS TO THE NATURE CONSERVANCY FOR THE USE OF THESE PHOTOS, AND CONGRATULATIONS TO EACH OF THE PHOTOGRAPHERS.  THESE ARE ALL AMAZING PHOTOS AND DESERVE THIS SPECIAL RECOGNITION.

Email ThisBlogThis!Share to TwitterShare to FacebookShare to Pinterest
Labels: Photos of the Week