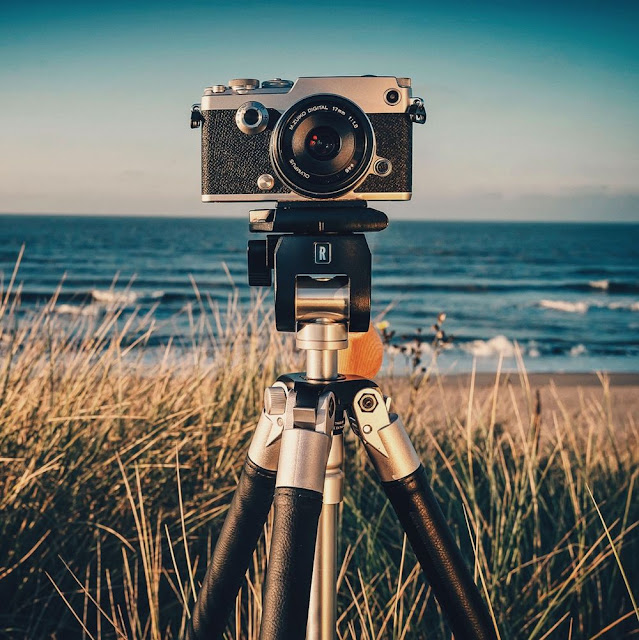 The Cokin Riviera Classic in the field.

Tripod design isn’t typically something that gets us excited—the majority of tripods on the market look more or less the same—but a new product from Cokin known as the Riviera Classic is throwing some classic style into the tripod market. 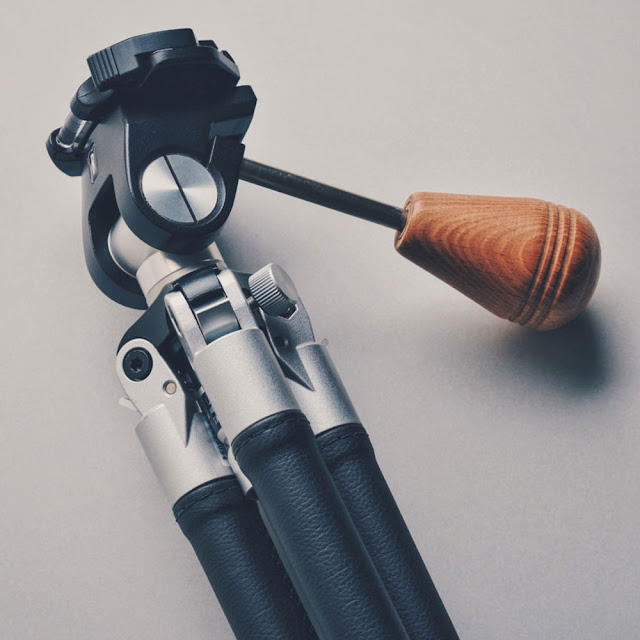 The Cokin Riviera Classic is a modern tripod with a retro feel.

The Riviera Classic is a modern tripod that is meant to match the feel of a number of “retro looking” digital cameras that are currently popular in the photography world.

It works like a modern day tripod, with telescopic leg sections, an invertible central column, a multi action head and an ergonomic tightening handle, the wooden and leather details of this tripod make it look like an antique. 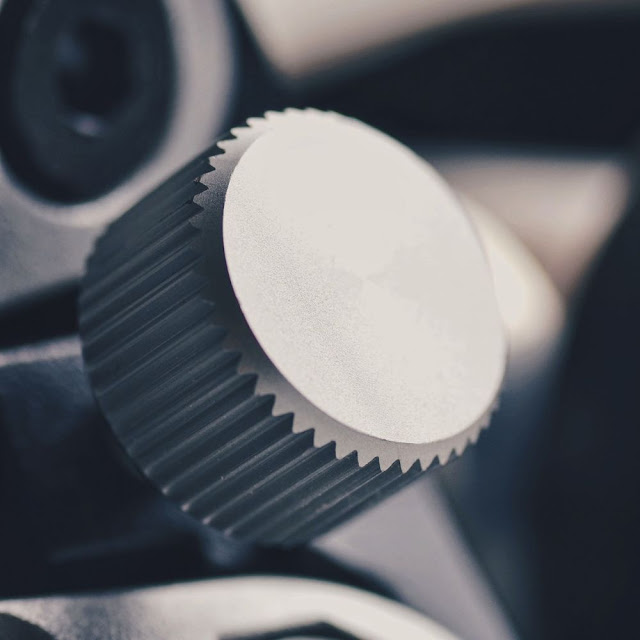 The metal tightening dials on the Cokin Riviera Classic.

The handle is made of Iroko wood, which the company says will patina over time. The tightening dials are made of knurled aluminum, designed to mimic the details found on vintage cameras. 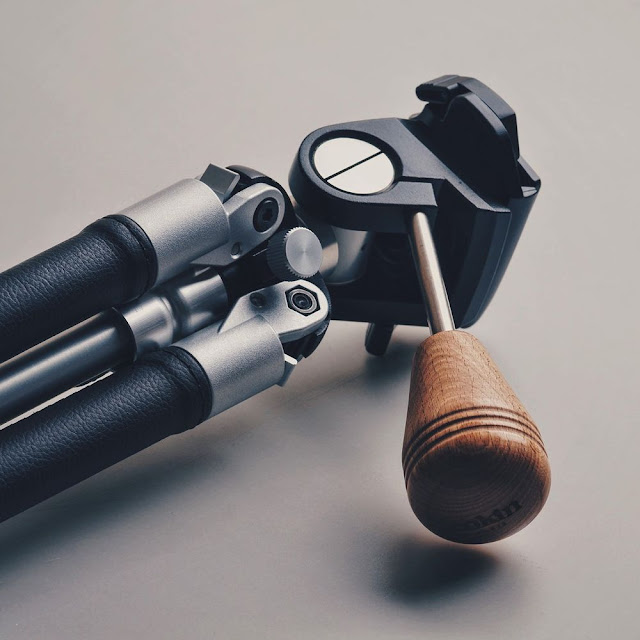 The handle on the tripod is made from Iroko wood.

It has a max height of 63 inches and a folded height of 23.6 inches. It weights 3.4 lbs and can hold up to 11 lbs. No details yet on availability or price, but overall its quite the classy looking tripod and would make an awesome accessory for shooting film or digital. 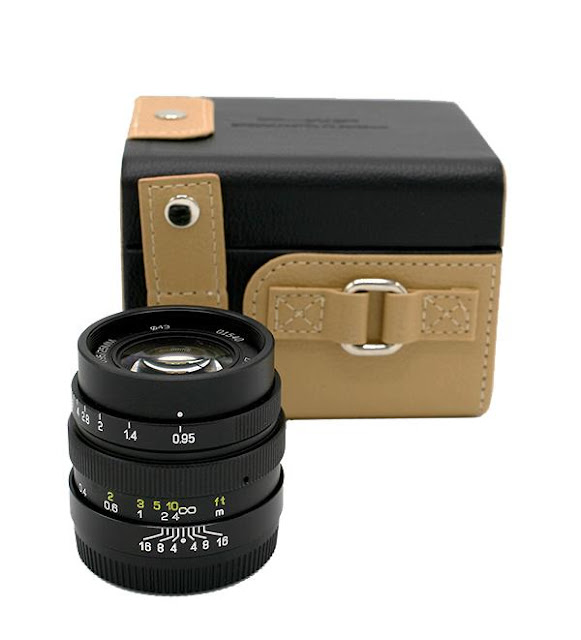 If you’ve ever lusted after a really fast lens—even faster than f/1.2—imagine how compelling the thought of an affordable f/0.95 lens might be. Well, buckle your gadget bags folks, because the Zhongyi Mitakon Speedmaster 25mm for Micro Four Thirds cameras is an f/0.95 that pops into the shopping cart for less than $400.

First Impression/Construction
The Zhongyi Mitakon 25mm f/0.95 lens is small. Filter diameter is 43mm and the overall length is about 2.4 inches. In fact, it’s so small that its size was a slight turn-off at first. Let me explain. The only other f/0.95 lens I’ve ever used is huge, with a capital uge. The venerable Canon screw-mount 50mm f/0.95 has a 72mm filter size and weighs more than 21 ounces. That’s heavier than five quarter-pound hamburgers (uncooked weight) with extra pickles. In contrast, the Mitakon weighs just a hair over one-half pound.

Side-by-side the comparison must look like a jellybean sitting next to a hen’s egg.
So I was a bit deflated when I unboxed the Zhongyi Mitakon 25mm f/0.95 lens and unwrapped the jellybean. It looks just like any other lens instead of a freak. Remember that the f/stop is calculated by dividing the measured diameter of a lens into its measured focal length.

An f/1 lens, mathematically at least, has a diameter equal to its length. It follows logically then, that any lens with an f/stop larger than f/1 is bigger around than it is long. That’s one reason why we see so few of them. And that’s why I was surprised and a tad let down when I first opened the box for the Zhongyi Mitakon 25mm f/0.95 lens. 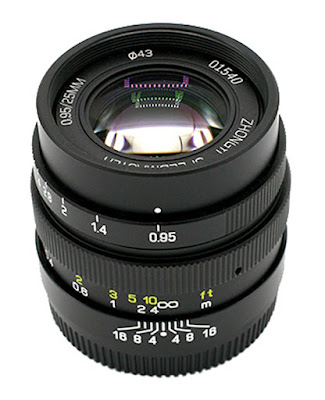 The mild preliminary disappointment vanished when I examined the mechanical
construction of the Zhongyi Mitakon 25mm f/0.95 lens. The focusing helicoid is smooth with just enough resistance. The aperture ring has no click stops and is likewise glassy-smooth, although a bit stiffer, which is ideal. The front and rear caps are generic and detract from the overall high quality appearance, but everything else looks topnotch.

Features
This is a manual focus lens for Micro Four Thirds cameras, many of which have digital focus aides and Focus Peaking features. I used this lens on a Panasonic Lumix GX1, Lumix GX8 and Olympus Pen F mirrorless cameras. Focusing was easy with the Zhongyi Mitakon 25mm f/0.95 lens because of the enhanced manual focusing features offered by these cameras. If your camera does not maximize manual focus, it’s possible you could have a problem with any manual focus lens.

The manufacturer claims eleven (11) aperture blades, but I can count only 9. And short of disassembling the sample, I’ll stick by my count.
They also claim that the Zhongyi Mitakon 25mm f/0.95 lens' optical design incorporates 11 elements in 9 groups, including one Extra-low Dispersion element, four Extra-high Refractive Index elements and two High Refractive Index elements. I did not disassemble the lens and I’m not going to speculate about the absolute accuracy of this information. Anyway, it’s performance that matters, right? Not specs.

The Zhongyi Mitakon 25mm f/0.95 focuses close to about 25cm, or 9.8 inches. I can confirm that it does focus this close, and the close-up results are remarkable.

Performance
Even wide open at f/0.95 the Zhongyi Mitakon Speedmaster 25mm is sharp. It’s easy to misunderstand how sharp it is because of the miniscule depth-of-field that exists at that lens opening. In dim light I was able to obtain good results. In bright light at a smallish aperture, say f/5.6 or f/8, the results are excellent.
Read more at http://www.shutterbug.com/content/zhongyi-mitakon-speedmaster-25mm-f095-lens-micro-four-thirds-review-super-fast-glass-budget#mFuBzwIGVoBZlUm0.99

The bokeh is a bit unremarkable, despite the 9 (or 11) aperture blades and the near-circular opening. Not to say that there is anything wrong with it, or that it looks bad. Some image highlights became lopsided ovals and some high-acutance edges were nicely smooshed. Let’s call the bokeh “acceptable” but not the singular reason to buy this lens.

Is this lens truly an f/0.95? I have my doubts. Based on some admittedly unscientific tests and concurrent comparisons to my Panasonic Lumix 25mm f/1.4 Summilux I’m pegging the true aperture to be somewhere between f/1.2 and f/1.4. But so what? The results are terrific, it’s faster than my f/1.4 and it’s fun to use.
Be Forewarned
The Zhongyi Mitakon 25mm f/0.95 lens for Micro Four Thirds cameras does not work with several not-so-old Olympus cameras because of the configuration of their “ladder like internal structure” as per Zhongyi. These Olympus models are definitely affected: E-PL6, E-PL5, E-PM2 and OM-D E-M5 (original model). The OM-D E-M5 (Mark II) is fine to use according to Zhongyi’s website.

Conclusion
First and foremost, I like this lens. I managed to capture some images with the Zhongyi Mitakon 25mm f/0.95 lens that I’m very happy with and I had a lot of fun playing with the shallow depth-of-field. It’s a nice, compact companion for my Olympus Pen-F. Despite the disparaging things I wrote at the beginning about this lens being smaller than I had expected, it is not a lightweight where image quality is concerned.

Micro Four Thirds camera owners can choose from a healthy variety of lenses. Olympus and Panasonic both offer robust assortments, and third party lens makers including Sigma, Tamron and Rokinon deliver unique pieces that fill niches and expand the array. Henceforth, you can include Zhongyi Mitakon in this elite group.

And don’t forget that one of the best features of the M43 system is the ability to adapt and deploy virtually any lens from 35mm film cameras. If you read my article New Life For Favorite Old Lenses: Micro Four Thirds Cameras Open The Door you already know that. Read the complete story here:  http://www.shutterbug.com/content/buying-smart-new-life-favorite-old-lenses-micro-four-thirds-cameras-open-door#kxlH5xmwWej0cyLe.97