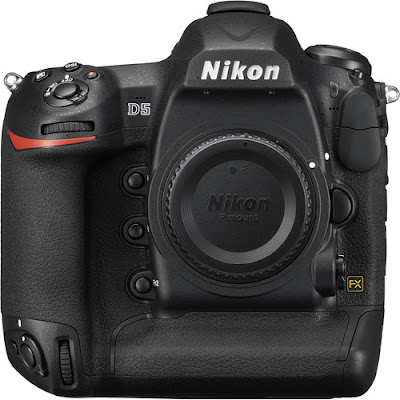 Nikon has registered the D6, D7, D8 and D9 trademarks with the United States Patent and Trademark Office. That means the Nikon D6, D7, D8 and D9 flagship full frame DSLR cameras will be announced in the next few years! That’s not a big surprise for us since the latest Nikon D5 (Amazon, B&H, Adorama) flagship DSLR camera received lots of praise: The Nikon D5 achieved a top score of 1170 at SenScore and the D5 got an impressive 89% overall score and Gold Award from the experts at DPReview.
So, let’s wait for the next 4 generations of Nikon flaship full frame DSLR cameras. Fujifilm officially announced the development of the new medium format FUJIFILM GFX mirrorless digital camera system that will deliver unmatched and exceptional image quality. Fujifilm will release the Fujifilm GFX 50S mirrorless camera which features the FUJIFILM G Format 43.8×32.9mm sensor with 51.4 megapixels and six lenses that will be introduced under the new FUJINON GF Lens series of interchangeable lenses after early 2017 sequentially for professional photographers and photo enthusiasts.
The new FUJIFILM GFX 50S will give professional photographers the most extraordinary image quality in the history of Fujifilm.
FUJIFILM GFX 50S
The FUJIFILM GFX 50S mirrorless digital camera will feature the new FUJIFILM G Format 43.8 x32.9mm sensor with an astonishing 51.4MP resolution and six FUJINON GF Lenses that will be introduced sequentially in early 2017.
FUJIFILM GFX 50S Key Features:
Availability and Pricing
The new FUJIFILM GFX system will be available in early 2017 in the U.S. with pricing to be announced at a later date. 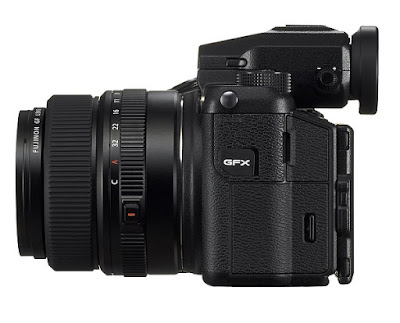 Press Release:
FUJIFILM announces development of mirrorless camera system “GFX”
The game has changed. Medium-format re-invented.
Large sized sensor and large-diameter realize the highest image quality in the history of Fujifilm
PHOTOKINA 2016, COLOGNE, GERMANY, September 19, 2016—FUJIFILM Corporation (President: Kenji Sukeno) is proud to announce the development of the mirrorless digital camera system “GFX” to deliver the highest image quality in the history of Fujifilm electronic imaging. The company will release mirrorless digital camera FUJIFILM GFX 50S which features the FUJIFILM G Format 43.8×32.9mm sensor with 51.4 megapixels and six lenses that will be introduced under the new FUJINON GF Lens series of interchangeable lenses after early 2017 sequentially for professional photographers and photo enthusiasts. The new series deliver the highest image quality Fujifilm offers as well as outstanding expandability and functionality as a camera system.
Over the course of its proud history that extends over 80 years, Fujifilm has developed and manufactured photographic films with advanced image resolution and outstanding color and tone reproduction to meet the needs of professional photographers and photo enthusiasts, an extensive range of professional cameras under the consistent philosophy that “a camera is a tool for producing artwork,” and high quality FUJINON lenses which forms an indispensable part of camera systems. All these technologies have been amassed to develop the GFX, which uses a medium-format sensor to achieve the highest level of image quality and a completely new type of mirrorless system, and its companion FUJINON GF lenses.
As a long-term manufacturer of photographic films and medium-format film cameras, Fujifilm was always aware of the impact which different format sizes have on photographic expressions. Using a larger format gives ultimate enhancement to a camera’s ability to capture “texture quality,” “stereoscopic effect” and “aerial feeling,” which cannot be attained even by substantially increasing the sensor’s pixel count. Since the launch of the X Series, an increasing number of professional photographers and photo enthusiasts expressed their desire to achieve the ultimate world of photographic expression with the X Series’ signature color reproduction. The GFX camera system with “G Format” is Fujifilm’s response to their desire.

Highlight features
(1) Obtaining the ultimate in photo image quality
Since the introduction of the X100 in 2011, Fujifilm has strived to achieve the best image quality possible with its X series of cameras. The latest and the most advanced addition is the new medium-format mirrorless camera GFX. It uses the new large-diameter “G Mount” and incorporates a large 43.8×32.9mm CMOS sensor. Boasting the effective pixel count of 51.4 million, the camera delivers superior sharpness and image quality that will satisfy professional photographers shooting commercial, fashion or fine-art landscapes. The sensor’s 51.4 megapixels can be adapted to various aspect ratios, including 4:3 (default), 3:2, 1:1, 4:5, 6:7 and 6:17, which were available in film cameras of the large- and medium-formats. The camera uses the “X-Processor Pro” imaging processor, which provides Fujifilm’s outstanding color and tone reproduction at an extremely high level. The result is the ultimate capability in photographic expressions that only Fujifilm can deliver thanks to its extensive knowledge in medium-format cameras and large-format films.
(2) Mirrorless camera system with a large sized sensor
The GFX is an all-new mirrorless camera system that revolutionizes the concept of medium-format cameras. Compared to conventional medium-format digital SLR cameras, the GFX is lighter weight, achieving a far more compact form factor. With regards to functionality, the camera follows in the footsteps of the X Series by featuring numerous physical buttons and dials, and is designed with an ergonomic grip, shaped carefully and optimized for the camera body and lenses. This model becomes Fujifilm’s first model to use a detachable electronic viewfinder, which you can remove when using an external monitor or wanting to make the system even lighter. In addition, an optional adapter makes it possible to fit the EVF in any angle, giving greater freedom in the choice of shooting angle. Other optional accessories that will be released at the same time, include the Vertical Battery Grip, which enhances functionality when shooting in the portrait orientation. The camera also supports tethered shooting, which has become an essential part of the professional photographers’ workflow, and will be compatible with various RAW conversion application software. 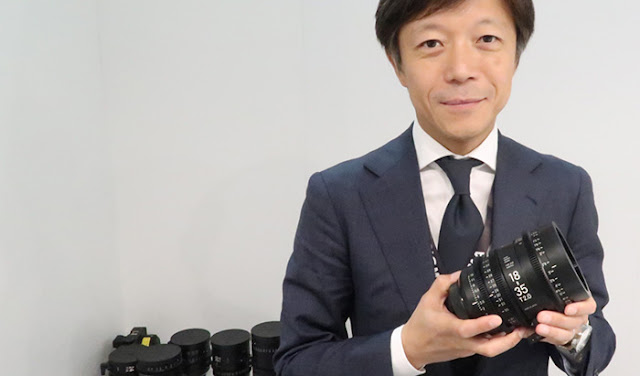 At Photokina 2016 Focus Numerique had an interview with the President of Sigma, Mr. Kazuto Yamaki and Mr. Yamaki stated that Sigma will make FE lenses for Sony full frame E-mount mirrorless cameras in the near future:


The future of FE mount is beaming. So yes we will come out of FE mount objectives in the future.

Sigma recently announced 8 High Speed Cinema Lenses, including 3 zoom lenses and 5 prime lenses. But the upcoming Sigma FE lenses mean the general photography lenses. So, what do you expect from Sigma?
Stay tuned for more info. 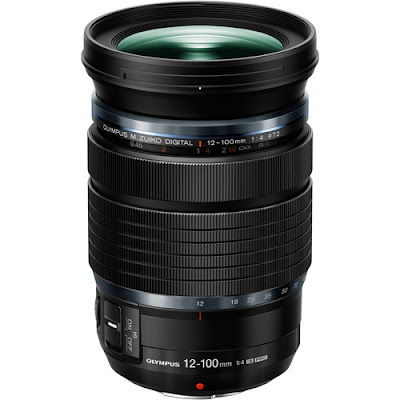 WOW, A LITTLE MORE CALM NOW THAT PHOTOKINA IS OVER.  BUT SOME EXCITING NEW THINGS ANNOUNCED THAT DIDN'T MAKE IT ON THE PRESS AS
OF LAST WEDNESDAY.  I THINK THE BIG ONE THAT IS GOING TO BE A BIG HIT
TO THE PROFESSIONAL MARKET IS THE NEW CAMERA FROM FUJI FILM.  A
MEDIUM FORMAT CAMERA, EVEN THOUGH THEY ARE A LOT OF MONEY, WILL
RESULT IN SOME OF THE SHARPEST, MOST BEAUTIFUL PHOTOS THAT YOU WILL
EVER SEE COME FROM ANY CAMERA.  HASSELBLAD INTRODUCED THEIR NEW
MIRRORLES MEDIUM FORMAT CAMERA EARLIER THIS YEAR, AND NOW FROM
JAPAN COMES FUJI FILM'S VERSION.  FUJI IS AN OPTICAL COMPANY, AND YOU
CAN BET THE OPTICS OF THIS CAMERA WILL BE AMAZING.  AND SHOULD RIVAL THE LENSES FROM HASSELBLAD.  IT IS GOOD TO HAVE THIS KIND OF
COMPETITION IN THE  PROFESSIONAL MARKET.

WHAT STILL AMAZES ME IS THE NEW LINE-UP OF HIGH-END CAMERAS NOW FROM EVERY MANUFACTURE.  WITH THE NEW INTROLDUCTION OF THE FLAG-SHIP CAMERA FROM OLYMPUS, IT WILL MAKE THE WHOLE MARKET VERY INTERESTING IN THE HIGH END MARKET ONCE AGAIN.  I REMEMBER BACK IN THE GOOD OLD FILM DAYS, WHEN I THINK I ONCE OWNED OR BORROWED EVERY BRAND OF CAMERA.  IT WILL BE INTERESTING TO SEE THE RESULTS OF EACH OF THESE AS THEY COME OUT.  I THINK I WILL FIND A PRESS TEST ARTICE OF EACH OF THESE CAMERAS.  SO WATCH THIS BLOG CAREFULLY, AND IF YOU EVER GET IN THE MARKET FOR A HIGH END CAMERA, THIS WILL BE THE PLACE TO DO SOME COMPARISONS.